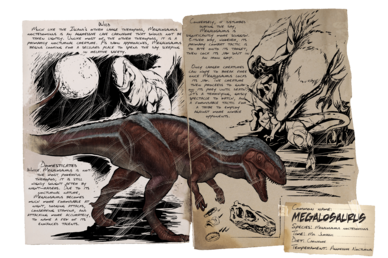 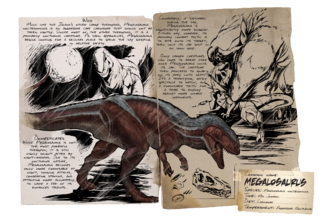 Dossier
These values may differ with what you see in-game or written elsewhere. But that is what the dossier says.
Group
Dinosaurs
Species
Megalosaurus noctedominus
Time Period
Mid Jurassic
Diet
Carnivore
Temperament
Nocturnally Aggressive
Release Versions

Megalosaurus is a fierce predator at night, actively hunting many types of animals. However, during the day it lies down and falls asleep. While a sleeping Megalosaurus can be approached safely, if touched or attacked it will awaken suddenly. If awakened, it will pursue the player for a short distance, although it will move sluggishly and its attacks will be weaker. 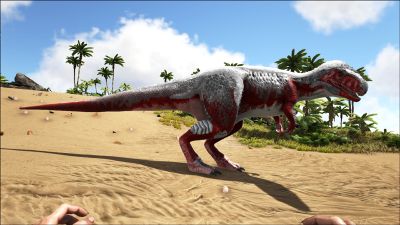 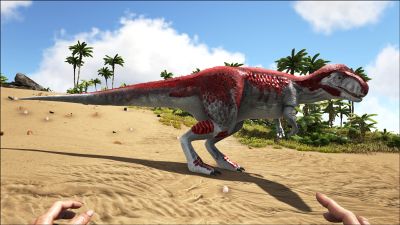 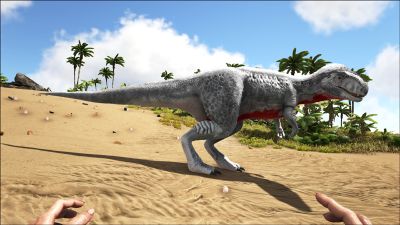 Be careful when taming a Megalosaurus as it will be unable to leave many of the caves where it spawns.

It can also be found Be found in extinction in the swamp in great numbers.

The Megalosaurus is weak and very slow during the day and tires out quickly, but at night its stamina and attack levels raise significantly and makes the Megalosaurus a very powerful mount for night raids. Its lock jaw attack will snatch and incapacitate individual enemies, allowing the rider to finish them off with ease.

Aberrant Megalosaurus does not utilize sleep deprivation when on the Aberration map, and so can remain active indefinitely. Without this handicap, players can enjoy what is otherwise a superior creature to the Rex. Because a Megalosaurus can be raised and imprinted upon, their combat effectiveness rivals Basilisks, Rock Drakes, and Reaper Kings. Note that when transferred to another map, they will continue to sleep as normal.

Because of its ability to clamp onto various animals, it is a great dino to use in cases where you don't have a bola or against creatures that bolas won't work. Warning, as grabbing and holding a wild dino will not prevent it from attacking your mount, and should you dismount to try and shoot tranquilizers at it, your Megalosaurus will begin to attack unless you put it in passive (Not tested). Having a tribe member shoot it while you continue to hold it will lead to a easy tame (It will automatically drop from the Megalosaurus' mouth when it falls unconscious). If solo, you can use it as a transport and capture a potential tame and move to a more secure location before dropping the animal in a taming pen or trap.

. However, you should NEVER, under ANY circumstances bring a Megalosaurus down into the actual trench without a cryopod available, as once it's down there, there's no route up. Instead, use it to kill the drakes within the trench before going down, getting the egg, and heading out.

The megalosaurus has very high damage, health, stamina, and decent weight making it a valuable warrior, plus just putting 15 or more points into speed will make it very quick. The only weakness is that its stamina regeneration speed is very slow.

For information pertaining specifically to the real-world Megalosaurus, see the relevant Wikipedia article.