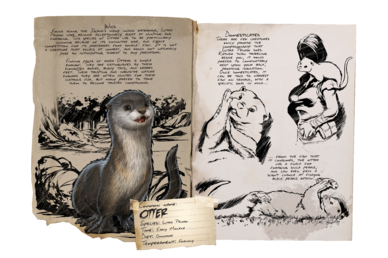 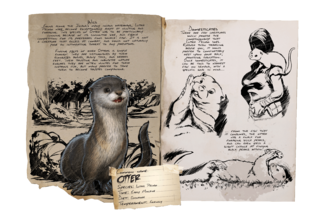 Dossier
These values may differ with what you see in-game or written elsewhere. But that is what the dossier says.
Group
Mammals
Species
Lutra peloso
Time Period
Early Miocene
Diet
Omnivore
Temperament
Friendly
Release Versions

The Otter is one of the Creatures in ARK: Survival Evolved.

Otters spend most of their life in the water, darting rapidly around without wandering too far from their origin. They target fish, from which they can harvest raw fish, silica pearls and black pearls. They can harvest meat from dead corpses too but, after taming, they only eat fish.

The otter is a very small animal, easily overlooked, and clearly resembling the modern otter. Their short, lustrous fur is brown, and when on land they move with a distinctive loping gait.

This section displays the Otter's natural colors and regions. For demonstration, the regions below are colored red over an albino Otter. The colored squares shown underneath each region's description are the colors that the Otter will randomly spawn with to provide an overall range of its natural color scheme. Hover your cursor over a color to display its name and ID. 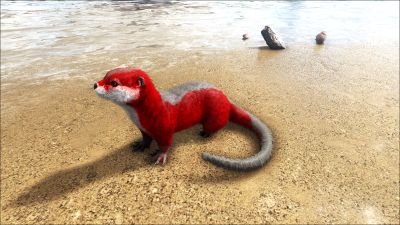 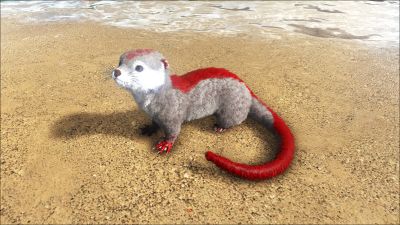 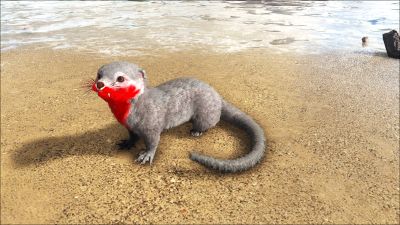 The Otter is a friendly creature and will attempt to flee when attacked, so be ready for a small chase.

Because of its low health, even a Spear can make quick work of an Otter.

The Otter poses essentially no dangers to even a low-level survivor, but its decent speed in water can quickly lead a survivor into a more dangerous area.

Very low HP, can be easily killed by Piranhas or swarms of Salmon.

The Otter is passively tamed in a manner similar to the Hesperornis. Fish must be killed, and their corpses dragged to the Otter. While still holding the fish, press E,

to feed the fish to the Otter.

Larger fish, and fish killed by the Ichthyornis, provide a higher taming percentage per fish.

Whilst they can be tamed by a solo survivor, having a buddy along to follow the otter whilst the other gathers the fish will ease the task of re-locating the tiny, fast animal for feeding.

Argy Fishing: It is possible for an Argentavis to pick up an otter right out of the water, provided the otter is close to the surface and the Argy doesnt touch the water. Simply fly on the waters surface, grab the Desired otter and bring it to land. if the Otter is in the Argy's Talons, drop the otter and pick it up with the beak. You can then land, and the otter will remain stationary for you to bring fish too. Additionally, if Ally Looking is enabled, the Argy will lean the otter towards you.

The relative ease of taming an Otter can provide early survivors with a reliable food source as the otter retrieves fish for them to cook, staving off hunger until better food sources can be acquired. Tip: keep them away from piranhas, their low health makes them easy to be killed. Kill fish by yourself and make them gather the corpses. Otter can work in a team with

Ichthyornis (Ichthyornis brings fish, otter collects (prime) fish; however the otter seem to not collect pearls in this case.

The Otter's ability to collect

Black Pearls from fish can provide early survivors - and even advanced survivors with no ocean presence - limited access to these resources until survivors have the ability to go diving for large concentrations themselves. However, as they have a limited oxygen supply, leaving them on aggressive, even if following a creature out of water, can cause them to drown if a large fish spawn occurs, or they get trapped behind or under something under water. This severely limits their use as an automatic gatherer of any resource.

Dimetrodon, the Otter provides a stacking insulation effect to nearby survivors. Unlike the Dimetrodon, however, the Otter can be carried around on a survivor's shoulder, which allows a passive insulation bonus while out and about. Leveling the Otter's Melee Damage increases the amount of insulation provided; hypothermic insulation is about 75 - 82% of melee damage, and hyperthermic is about 34 - 38% when the Otter is being carried.

Ever since the Otter was introduced to the game at the official launch of ARK, it has been able to store as many of the same

Artifact as its weight allows, despite the fact that no other creature, including players, in ARK can hold more than one of the same type of Artifact. It is unknown if this is a glitch that has still somehow not been fixed, or intended.

Because of their all around cuteness, Otters are a popular pet among survivors, even with the ability to put a hat on them.

For information pertaining specifically to the real-world Otter, see the relevant Wikipedia article