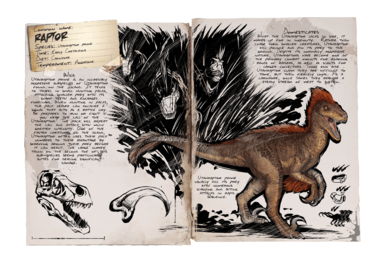 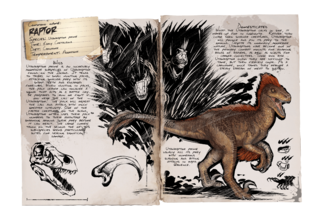 Dossier
These values may differ with what you see in-game or written elsewhere. But that is what the dossier says.
Group
Dinosaurs
Species
Utahraptor prime
Time Period
Early Cretaceous
Diet
Carnivore
Temperament
Aggressive
Release Versions

This article is about Raptor, not to be confused with

The Utahraptor (Yoo-tah-RAP-tor) or simply Raptor is one of the dinosaurs in ARK: Survival Evolved.

Raptors will attack dinosaurs and players on sight. They often attack with a "run-and-bite" strategy and can pounce at smaller targets than itself or of equal size holding the target down making them unable to move, making it difficult to defend against an onslaught. A dangerous predator to encounter in the dark, Raptors are nearly impossible to fend off when attacking in packs and aided by darkness. The Raptors often attack from different directions, using this method to take down prey while avoiding damage. Due to their high speed and ability to vocalize for pack buff (if in a pack of 3 or more), they are hard to flee from during a player's early levels, and it is advised to make for deep water if attempting to flee an attack or run behind a door and immediately shut it.

The Raptor is a relatively small dinosaur with feathers on the head, back, tail, and on the backs of the arms. They come in a variety of colors, although green and reddish brown seem to be the most common, while the rarest color variation is black.

This section displays the Raptor's natural colors and regions. For demonstration, the regions below are colored red over an albino Raptor. The colored squares shown underneath each region's description are the colors that the Raptor will randomly spawn with to provide an overall range of its natural color scheme. Hover your cursor over a color to display its name and ID.

This section displays the Tek Raptor's natural colors and regions. For demonstration, the regions below are colored red over an albino Tek Raptor. The colored squares shown underneath each region's description are the colors that the Tek Raptor will randomly spawn with to provide an overall range of its natural color scheme. Hover your cursor over a color to display its name and ID. 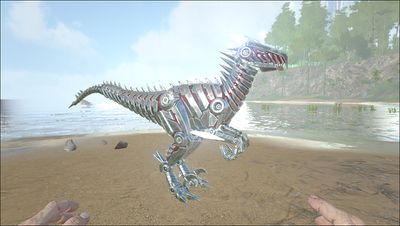 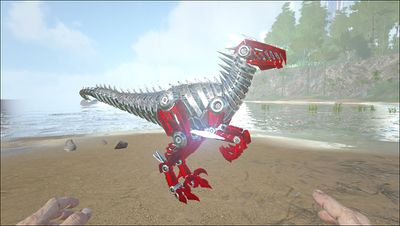 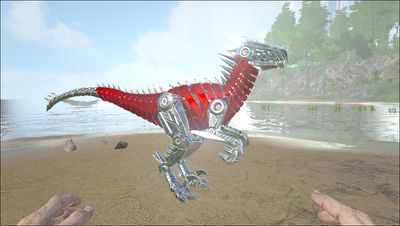 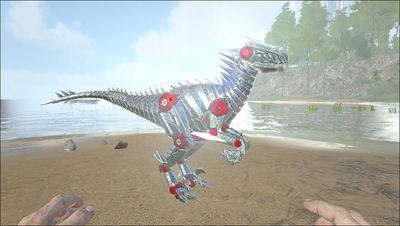 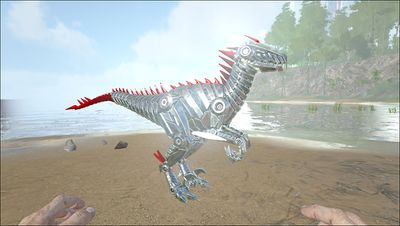 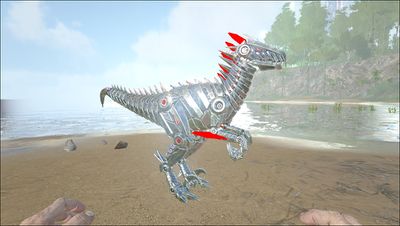 The Tek Raptor is a creature that was permanently added to the game in the Extinction Chronicles III event. It is a unique alternate of the original Raptor, and is purely made of Tek. Unlike the original, they spawn at a 5% rate at a 20% higher level than usual.

Start with a thrown Bola to keep it from pursuing you. Once it's immobile, use Tranquilizer Arrows (headshots result in quicker knockouts). Do this carefully; it should not take very many. Once it is unconscious, use Narcotic. Narcotics and Prime Meat will tame it more efficiently. Narcoberries and Raw Meat also work. Keep a sharp lookout for other Raptors as they often come in groups, and for other predators, as they are frequently found in high-traffic areas; unless you have a large herd of supporting dinos or a number of tribemates to help out, you may have to take the time to find an isolated Raptor, which can take a long time, or kill off the extra creatures.When a raptor is alone, wait for it to kill another dino and tranq it while it is feeding on the corpse.

When in pack of 3 or more, the Raptor of the highest level in the group gets the Alpha boost upon making use of vocalization for 45 seconds. The Alpha has a glowing red cloud around it to indicate its status whereas the rest has an orange cloud next to themselves. Tamed Raptors also have a bonus for each member of the pack : so a pack of three Raptors or more will receive a +1 Bonus, which will go up to +X in a Group of X+1 or more Raptors (max amount of X is 4).

This feature is currently broken: tamed and/or bred raptors will almost never use this ability until they are released from a Cryopod at least once.

They run fast and attack faster, so be prepared for a quick reaction, usually a player with good speed and stamina can outrun them, but be aware, they can be persistent. Always check the Raptor's surroundings and be prepared, they have a good visual range.

Raptors can often be found in packs of two or more, depending on the zone you will find them close to the shores, or deep in the jungle.

Raptors can be tamed in different ways. One way you can tame them is by using bolas on them and then knocking them out.

The best strategy is to keep distance or heavily engage with them, depending on your stats, armor and weaponry. At first you may want to avoid them. One trick is to run to a herd of trikes, Stegos etc. and get the Raptors to hit and aggro them by accident, making a diversion or a means to gather lots of meat and hide. If a Raptor is a low level, a Spear can easily kill it, but beware, if they are in a pack of two or more, this strategy will not work! A way to kill high level ones, or two or more Raptors is to have a good climber, like a Thylacoleo, or a flyer. Then climb onto a big rock, as they are good jumpers, from there, shoot it with a Sling, Bow, Crossbow etc. It should die fairly quickly.

Also, make sure the Raptor is not glowing red. If it is, that's an Alpha Raptor!

One well placed headshot with a Crossbow can take out a Raptor with a level between 1-20. Since they are fast, try to make them run in a straight line and be ready for shooting. A full set of hide armor or other armor stronger than cloth armor and any weapon will also do.

Raptors can be dangerous if they reach you from behind, eventually you will learn to recognize their steps on the ground and start running before this happens. If you or your dino's size are relatively smaller than them, they can pounce and render you immobile for some time. Try to take them out when they are engaged with some big animal if you want to easily kill them, just don't hit the bigger animal!

Raptors have a very low Torpor tolerance, you can try to knock them out with a few punches if you have a high melee damage stat. Wild Raptors also make for awkward swimmers, and even a relatively ill-equipped survivor with a basic spear can lure them into the shoreline as a tide-turning last resort.

If they have immobilized a target, they can't attack any other dino until they hopped off the said target, making them vulnerable should there not be any other Raptors nearby.

They can be useful and lightweight for traveling, as far as their Stamina lasts, you may want to increase their Stamina if you want them for transport, or their health and attack damage if you want them to assist you on combat. They gather about the same or slightly more material per carcass than a Stone Pick, but finish gathering faster.

They can also pounce onto smaller targets to temporarily immobilize them (and to kill them). If a survivor is on a certain mounted dino, Raptors can also knock them off their mount and immobilize them.

The following creatures can be immobilized by its pounce ability:

The following mounts that a Raptor can knock a player off of:

The following additional creatures on ARK: Survival Evolved Mobile can be immobilized by its pounce ability:

For information pertaining specifically to the real-world Raptor, see the relevant Wikipedia article