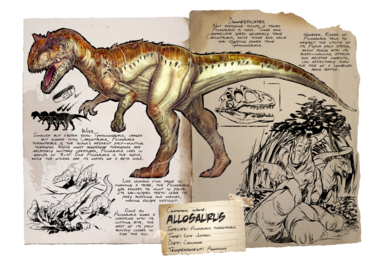 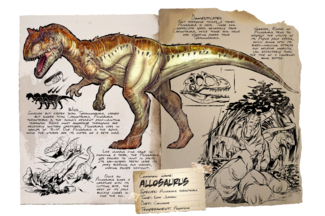 Dossier
These values may differ with what you see in-game or written elsewhere. But that is what the dossier says.
Group
Dinosaurs
Species
Allosaurus therotribus
Time Period
Late Jurassic
Diet
Carnivore
Temperament
Aggressive
Release Versions

The Allosaurus (AL-uh-SAWR-us), or sometimes referred to as just Allo, is one of the Creatures in ARK: Survival Evolved.

The Allosaurus is an extremely aggressive and dangerous predator, even more so when accompanied by its ever-present pack mates. Approach with caution - you may not always have visual on its nearby allies when approaching a singular Allosaurus.

Allosaurus always spawn in packs of 3, but packs will merge if they encounter each other. As long as a pack has 3 or more Allosaurus in it, the Allosaurus with the highest level will receive a pack boost, which can be identified by a glowing red-orange aura, similar to that of an

Alpha Predator. The pack boost applies to both wild and tamed Allosaurus and provides the following benefits:

These buffs only apply to the Allosaurus with the Alpha Boost. However, in larger packs, multiple Allosaurus can sometimes become the Alpha.

The Allosaurus is similar in appearance to the

Rex, with a few key differences. The Allosaurus is larger than the Carnotaurus, with longer arms, scattered plates and osteoderms on its head and back, and crests above its eyes. The alpha Allosaurus can be easily identified by its glowing red-orange aura (although take care that you haven't actually spotted an Alpha Predator).

This section displays the Allosaurus's natural colors and regions. For demonstration, the regions below are colored red over an albino Allosaurus. The colored squares shown underneath each region's description are the colors that the Allosaurus will randomly spawn with to provide an overall range of its natural color scheme. Hover your cursor over a color to display its name and ID.

The Allosaurus Brain can be found in the corpse's inventory or in the inventory of a tamed creature that killed it.

The Allosaurus has high torpor, similar to a

Rex, but tames quickly once knocked unconscious. The best way to take on an Allosaurus is to single out a solitary animal from its pack. Be careful not to kill the others while taming it, though, because lone Allosaurus will run away in search of a new pack if the old one is killed off. To combat this, the target Allosaurus should be lured into an enclosure and properly secured before taking on the rest of its pack. This strategy, in particular, is useful if you want to tame the alpha Allosaurus, as separating and killing its pack mates will remove its Alpha buff, weakening it significantly. Be careful, as higher levels are easy to kill with Bows and Crossbows if you do not pause between shots. Taming more than one Allosaurus at once is risky.

Solo attempts require a very careful approach: not only is attacking a pack of Allosaurus by yourself unwise, but the areas where Allosaurus spawn are also likely to be crawling with plenty of other dangerous predators. The best way to do this is to position yourself on a tall rock, preferably landed on by a flyer, to protect you from their attacks. After an Allosaurus has been hit by your Tranquilizer Dart or Tranquilizer Arrow, it and the rest of its pack will become aggressive towards you. Continue shooting, making sure to aim for the head and pause between shots, especially when using a Crossbow. You should be sure to kill the other Allosaurus (as well as any nearby predators) while you are in relative safety. Once your target's torpor reaches a high enough level, it will turn and flee. Be wary, as they could either run off entirely or run around in circles. As long as the Allosaurus stays nearby, continue to shoot it from the safety of your rock. If it turns tail and flees out of range, you can either chase it down and shoot it from the back of a

Quetzal or run it down with an

Argentavis, landing each time you have an opportunity to shoot. Obviously, the latter option carries its own risks.

If you are able to isolate a high-level Allosaurus and remove the alpha status from it, you can ride on a burly mount that still allows the use of weapons, such as a

Griffin, then tank its damage while pelting it with tranq arrows/darts. A singular Allosaurus only hits as hard as a

Carnotaurus. Keep in mind that the Allosaurus will start running when its torpor gets high so it's advised to have a mount that can keep up.

The gas attack of the

Pachyrhinosaurus can make Allosaurus unable to sprint, making a knockout much easier.

This section describes how to fight against the Allosaurus.

Taking on an entire pack of Allosaurus is unwise. It is best to attack them one at a time using ranged weapons. This can also be done by picking one up with a Wyvern or Quetzal and moving it away from its packmates. Another approach is to overwhelm them with superior numbers by leading a pack of your own into the fight- just be careful to not be singled out or get in the way of the alpha. Attacking an Allosaurus head on is a bad idea due to the bleed ability which slows your Dinos.

Strong melee damage and a devastating knockback effect means that ranged weapons are extremely helpful for taking on an Allosaurus.

A single Allosaurus is dangerous; a pack of Allosaurus is lethal. The bleed effect inflicted by an alpha Allosaurus will ensure that survivors who manage to escape from a fight will continue taking damage, so it's best to cut your losses early if you think you might lose. Their jack-of-all-trades approach to speed and power along with their pack mentality makes most conflicts a losing fight from the get-go. Additionally, wild Allosaurus runs 57.4% faster than normal survivors, so at least 39 level-ups on Movement Speed (158.5% Speed) are required to outrun one.

Compared to similarly sized carnivores such as the

Rex, a single Allosaurus does not have a lot of health. The exception to this is the alpha Allosaurus, which takes 20% less damage, but that buff can be removed by killing its packmates.

Travel: The vast majority of wild predators will leave the Allosaurus alone, which makes them great for travelling through dangerous terrain in relative peace. They also boast a decent movement speed and weight comparable to a

Triceratops (Level Stamina and Weight). A high-level Allosaurus can also prove to be a very powerful creature, and combined with its speed, travel can be relatively safe as most threats will be manageable.

Hunting: The Allosaurus is an excellent mount for hunting, both on its own and with a pack. Their fast base speed allows them to maintain distance from most enemies, avoiding damage completely. It edges out other carnivores like Carnotaurus for top-tier hunters because of the constant knockback it deals with each attack and the good amount of resources it can gather. (Level

Melee Damage). Below are comparisons to other carnivorous tames.

War-Mount/Pack Tactics: As stated above, the Allosaurus does well in regards to its potential for battle. Its health and damage is high enough to resist some attacks while also having some pretty decent speed, though its stamina is mediocre, worse than the Carnotaurus in fact. The true capability of the Allo however is in the pack, as the Alpha will receive increased damage output and damage resistance. Though the pack members of a pack of 3 will not be given any boosted stats, a much larger group of around 4 or higher will begin to give multiple Allosaurus' with the Alpha buff. Therefore, a pack of 30 Allos may have anywhere between 9 and 15 alphas. Any Allo that has the Alpha buff will also be able to inflict gore damage with its second attack which drains Health and stops a target from being able to sprint, which can be devastating to high health tames and creatures, as this Bleed affect operates as a percentage. A huge group of Allos can thus be devastating as their combined fast DPS, gore attacks, good knockback, and multiple units being able to attack at the same time due to their smaller size, can deliver more damage than almost all other tames of the same group size. (

Melee Damage, and if desired,

Raid Boss DPS: The Allosaurus's gore attack DOES NOT work on

Bosses, as does no other status effect. However, Allosaurus are smaller and much faster than most high-end boss killing creatures, also bearing a fast breeding and cheap saddles. Together, these attributes make them ideal to complete the

Genesis Brute Hunter: Bleeding caused by its attacks also works on Brute Creatures in Genesis, making it the best creature to hunt them down even on Alpha level. Be sure to bring a load of Allosaurus to deal the DPS and several high health tames to tank the heavy hits of the Brute Creatures as the health pool of an Allosaurus is only average compared to other tames. (level up Health; recommended to maximize Health).

Caving: Because of the Allo's small hitbox it is able to access some caves, like the Upper South Cave. (Unable to do any cave on Mobile) For the caves that it can access, the Allosaurus makes an excellent choice thanks to its large size. Since it's so large, almost all of the cave creatures do not perceive it as a threat, enabling easy travel from point A to point B to reach the artifact. If conflict ever does occur, its HP and damage is more than enough to deal with cave threats.

For information pertaining specifically to the real-world Allosaurus, see the relevant Wikipedia article.