This article is about Alpha Deathworm, not to be confused with 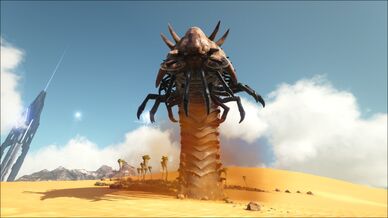 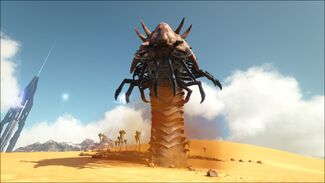 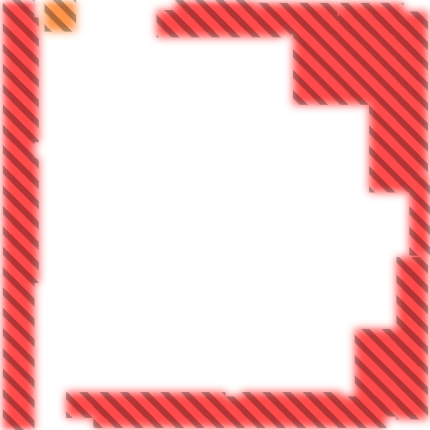 The Alpha Deathworm is one of the Alpha Creatures in ARK: Survival Evolved. It is only available in Scorched Earth.

Once you are in its aggro range, it chases you until you get out of range just like any other

Deathworm. Also like other Deathworms, it can despawn while it is chasing you. If you want to prevent it from despawning, be sure to make it "pop" up every minute or less as they have a very very short despawn period. If it is not aggroed, the Alpha will remain stationary just like normal Deathworms.

An ice-themed version of the Alpha Deathworm, found on Ragnarok, and the final boss of the Frozen Dungeon. It has a light blue color scheme with white appendages and grey claws.

Alpha Deathworms look like regular Deathworms, but are far bigger and have a red glow.

The Alpha Deathworm can spawn anywhere in the Dunes but seems to be more common farther away from regular land. Search at night as the glow of the Alpha will be far easier to spot.

It is not recommended to fight any Deathworms with a

Rock Elemental because they do reduced damage to Deathworms while Deathworms do a significant amount of damage to them.

Rex with at least 10,000 health and 400% damage can take one down albeit with very little health remaining (up to 6 to 8 thousand health can be lost). So it is best to have multiple perfect Rexes or a tribemate or two standing a good distance away hitting it with fire arrows.

Another way to kill it is to make it pop up with a fast tame (or a slower one that can take hits) by running (or flying) directly at it then straight past it, hopping off, and hitting it with fire arrows when you're a good distance away. This works well enough because it stays up significantly longer than a regular Deathworm and it still gets hurt from fire damage while underground (the blood damage appears above its sand mound)

Possibly the best way to fight Deathworms with little risk is to use oil jars and fire arrows paired with a fast mount. Before aggroing a Deathworm, throw an oil jar on the ground and light it. Then, lead the Deathworm into the fire and continuously make it pop up over the fire until it runs out. If done correctly, this should only consume three

Flame Arrows per Deathworm. The only disadvantage this method has is it cannot be used in rain, as it extinguished the oil jar's fire much quicker. You can also use high-level

Lightning Wyverns to stay out of range of its bite and get that damage before it burrows underground.

This creature could attack you at any time and it is hard to tell where it is until it comes out of the ground. So always be prepared when they could strike. However, since it is an

Alpha Creature, it has that distinct red glow which makes it easier to find than a regular Deathworm. Even when it is under the sand, you can see the alpha aura rising above its location.