This article is about Astrocetus, not to be confused with 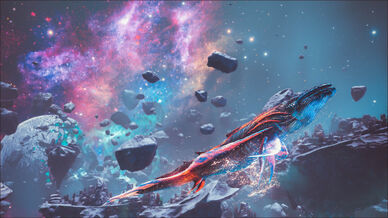 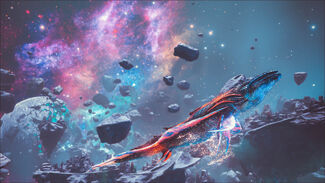 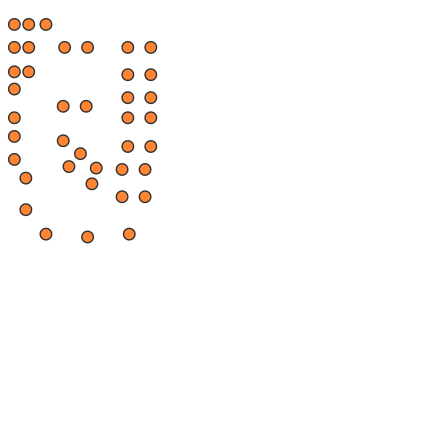 The Astrocetus is a Creature in ARK: Survival Evolved's Expansion Pack Genesis: Part 1.

The Astrocetus is one of the Creatures that dwell in the Lunar Biome.

The Astrocetus is considered a high tier tame because of its unique ability to warp through hyperspace.

When spotted, the Astrocetus will stay still for about 2 seconds, then start to move very slowly, moving its fins up and down like a modern whale.

In between 8 seconds intervals, the Astrocetus will shoot colorful cosmic energy from its blowhole, which may be a form of reoxygenating, as do modern whales, by breathing through their blowholes, blasting out moisture. This colorful blast will momentarily allow the whale to gain speed. As it gains momentum, the energy emitting from its fins will get larger and glow brighter but dim when the creature slows down.

At first glance, the Astrocetus bears a close resemblance to a modern baleen whale, such as the humpback, but it has 14 eyes, 7 on each side, 4 pectoral fins, 2 pelvic fins, and small, slender wings that go all the way down each side of the body and ending in a point rather than two flukes. It also has translucent skin, thus enabling the player to see its insides.

This section displays the Astrocetus's natural colors and regions. For demonstration, the regions below are colored red over an albino Astrocetus. The colored squares shown underneath each region's description are the colors that the Astrocetus will randomly spawn with to provide an overall range of its natural color scheme. Hover your cursor over a color to display its name and ID.

This section describes how to fight against the Astrocetus.

Despite having a Docile temperament, the Astrocetus is anything but docile. Never get close to the Astrocetus unless you are in for a dangerous time or harvesting for materials.

There is not much strategy required to kill or tame an Astrocetus. Most often, players will kill it during a taming attempt due to its relatively low health pool for such gigantic size. Moreover, using a tek skiff with any good quality firearm or turret makes it ridiculously easy to kill.

Any good firearm like assault rifles to even the classic rocket launcher will do the trick just fine for an easy kill. Cannons on tek skiffs are by far the most effective way to either killing or taming your space whale. They are so abysmally slow that you will have no problem positioning your cannon and shooting even in single player.

Due to its territorial nature behind the docile temperament, it will bite or tail slap at the target that got too close to it. The range of hit from both of its attacks is huge, making it difficult to withstand the knockback from the lunar biome it resides at.

Due to its sheer size, slow movement, and surprisingly low health, the new weaponry introduced (especially the new Cruise missile) allows the Astrocetus to be easily targeted and killed if many players aim for it. Its attacks do little to absolutely minimal damage to a player well-equipped to withstand the lunar biome's harsh conditions, so they should not pose much of a problem.

For general information about domesticating a wild creature, see Taming.

Astrocetus has the ability to warp to its destination, similar to a hyperspace jump. This warp will also take anything within the vicinity with it and can go through Creatures, Structures, and natural formations.

Astrocetus Tek Saddle provides the rider with three gun turrets as well as having a bomber mode that is powered by its natural space energy that it converts into bombs to destroy enemies below.

Leveling speed increases the "Cosmic Power" capacity used for the bomber mode and hyperspace jumps. The Hyperspace Jump also seems to have a relatively low range, equal to around the body length, so it's not really a method of travel. Its best use would be bypassing enemy structures or terrain obstacles or maybe dodging rockets with good timing. Hyperspace jump can be activated by the spacebar then left-click and is similar to Enforcer teleporting.

Leveling melee increases the damage for its bombs to a point it can do serious damage to massive groups of tames.

Surprise Raid Dino: Thanks to its warp ability, you could use it to warp into a tribe's vicinity with all your prepared dinos without the enemy tribe knowing quickly taking them out before they can react via bombs, turrets, and the other creatures you bring with you. Do note that when dismounting the astrocetus outside of the lunar biome, it may start taking damage for no reason. This usually occurs lower to the ground.

Titan Killer: You can easily kill

Titans with the Astrocetus by just flying over them and throwing bombs (Level up Damage).

Cargo Transport: Most Astrocetus also have a fairly reasonable weight, making them excellent flying Cargo Transports, and when transporting valuable cargoes, having friends mount the turrets and fly escort on war mounts such as wyverns or tapejaras can almost guarantee safe passage. Level Weight and Health for this to be efficient.

Lunar Biome Brute Hunter: Because the whale can't be affected by the gravity, the Astrocetus can float above the Brute creature while fellow tribe members mount the two bottom turrets to deal constant damage to it. This role doesn't apply when hunting the Brute Astrocetus since it too can float. Be sure to have it full of ambergris and Element before doing the Alpha level missions.

Base Destroyer: Because the Astrocetus tek saddle has multiple turrets mounted all over it and its ability to use carpet bombs, this role is perfect once tank tames such as paracers, carbonemys, and gasbags have absorbed all the bullets from the auto-turrets that dot the base. Once the turrets have been drained of ammo, the Astrocetus can pull up and begin destroying the buildings and towers that consist of an enemy tribe's base. Pair the Astrocetus with Meks for total base destruction. This role is when a base becomes defenseless once the auto-turrets have been drained as turrets can shred through an Astrocetus' health.

Bomber "plane": Using the astrocetus bombing ability enables players to use it as a bomber plane. Paired with a few saddled and ridden tropeognathus as fighter escorts, this can be an effective means of attack.