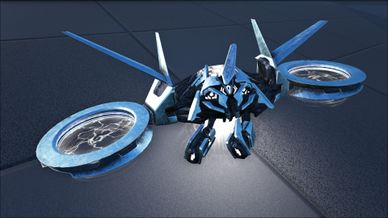 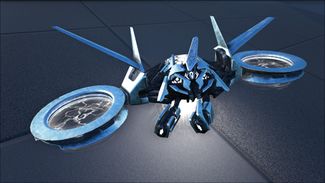 None
Drag Weight
149
Can Damage

Overseer Arena, accesible via the Ascension Panel in the Tek Cave on The Island.

The Attack Drone is a creature in ARK: Survival Evolved, and one of the two minions that defend the

With the introduction of the Overseer, Attack Drones and

Defense Units were added to serve as minions. They are summoned throughout the battle. They drop

Element upon death, which can be helpful to players using Tek during the Boss fight. Any Element collected during the fight will disintegrate afterwards when the player Ascends.

Attack Drones appear as real-life drones, with a futuristic touch. Upon closer inspection, the Attack Drone is actually part-creature, part-robot, a cyborg essentially. It has a booster jet on its belly as well as 2 "wings" or hover pads to fly, and 2 small cannon arms to shoot tek plasma bolts. It has many broken up white eye-like patches on the face and shiny tek on its back, both of which glow along with a slight glow in the rest of the body. A caved-in depression on the face resembles a mouth. The flesh is not uniform, but spindly and weird like in the Defense Unit. The whole body is adorned with different pieces of tek metal.

This section describes how to fight against the Attack Drone.

The Attack Drone is spawned in continuously throughout the boss fight, with groups of them with the one purpose to attack the survivor from the air, purposefully distancing itself to make it difficult for most dinosaurs or melee attacks to reach it. Along with the

Defense Units, they attempt to distract the survivor in order to protect the

Since the Attack Drone continuously distances itself from its targets, using ranged attacks/weaponry is an effective option. Depending on the strength of an individual bow or gun, most should be able to kill the Attack Drones in good time. Just keep in mind to have sufficient armor to withstand the tek plasma blasts if need be.

Compound Bows and other powerful ranged weaponry are effective against these minions. Tek weapons like the

Tek Rifle are also highly recommended, as they are powerful, reliable, and as a plus, when an Attack Drone dies, it will drop 1

Element item which can be used for ammo.

A single Attack Drone is actually not too powerful as its small tek cannons that it will shoot at the survivor will not do much damage and are fired slowly, though its health is rather sizable and they are hard to reach as they fly above. They often are more of an annoyance and distraction to the survivor in the battle arena rather than a significant threat. But don't get too relaxed, as it would be a mistake just to ignore them; the most dangerous thing that can occur when confronting the Attack Drones is when their numbers become too large and if one does not keep their size down by killing them off, they may overwhelm the survivor with a flurry of tek plasma bolts in their sheer numbers and prevent him/her from damaging the Overseer enough.

Pump-Action Shotgun deals a lot of damage to an Attack Drone. But be mindful that in order to effectively damage it, you must be close to the drone, like right below it, while firing.