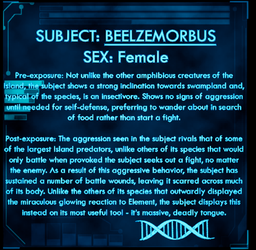 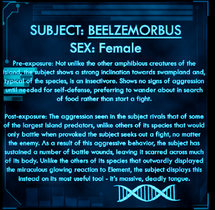 Greenhouse
Habitat
The Beelzemorbus Arena, accessible through the Boss Teleporter in The Marshy Hallows, the Withered Haunt of the Guardian, the Twisted Dungeon of the Warlord, the Eternal Maze of the Wolf, the Frosty Advent of the Tannenbaum, and Smoldering Moors of the Forsaken, and the Stolen Treasures of the Past.

The Beelzemorbus is one of the Creatures in ARK: Survival Evolved Mobile.

The Beelzemorbus always spawns with the same color scheme and has no color regions.

This means it is currently impossible to make alterations to the Beelzemorbus's colors.

This section describes how to fight against the Beelzemorbus.

While the Beelzemorbus is jumping at the survivor, hitting it with a

Rocket Launcher will cause the Beelzemorbus to flinch. A

Compound Bow can also deal a decent amount of damage. Using a

Pump-Action Shotgun can inflict some damage in the event that the Beelzemorbus pulls the survivor in. Be wary of its minions, which deal small amounts of damage and inflict

Torpor, so the use of

Bug Repellant is highly recommended. The

Sword will also serve to dispatch of the

Meganeuras if the survivor gets caught in the swarm, since the

Pump-Action Shotgun cannot hit at such a close range.

Rocket Launchers can deal loads of damage to the Beelzemorbus and ensure that the survivor does not take too much damage. 2 ×

Movement Speed and a full set of

Enduro Stew can assist the player to fight the Beelzemorbus unscathed.

Ranged Weapons, which allow the player to hit and run, are recommended since Beelzemorbus can pull the survivor in with its tongue. A

Sword can assist the survivor should they find themselves too close to the Beelzemorbus.

Meganeuras it summons deal a decent amount of damage and becoming trapped in the swarm will render ranged Weapons useless.

The Beelzemorbus can take headshot damage, so shooting at the front will inflict more damage. A

Sword can be used to smack the Beelzemorbus into the air, and while it is in a state of "falling", it is unable to attack.