This article is about Broodgenetrix, not to be confused with 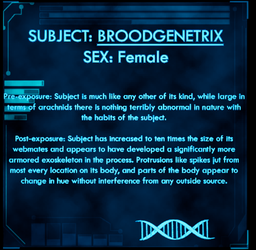 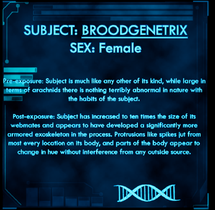 Tek
Habitat
The Broodgenetrix Arena, accessible through the Boss Teleporter in the Cursed Caverns of the Webbed, The Eternal Tomb, The Smoldering Quarters, the Hopeless Chambers of Agony, and the Halls of Rejuvenation.

The Broodgenetrix is one of the Creatures in ARK: Survival Evolved Mobile.

The Broodgenetrix always spawns with the same color scheme and has no color regions.

This means it is currently impossible to make alterations to the Broodgenetrix's natural spawn colors.

This section describes how to fight against the Broodgenetrix.

Ranged weapons such as the

Pump-Action Shotgun can inflict decent amounts of damage to the Broodgenetrix.

The arena have webbed floor which slows you down significantly but when you jump often enough it won't slow you down.(mostly)

The Broodgenetrix doesn't deal that much damage to survivors wearing decent gear, but it inflicts

Araneo minions do not attack when using

Bug Repellant and the Broodgenetrix can be easily out-paced.