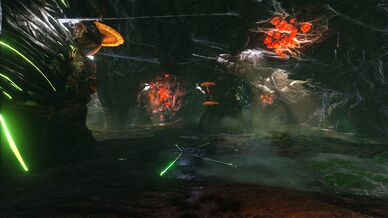 The Broodmother Arena is an arena for fighting the

The Broodmother Arena itself is located beneath the green Obelisk, outside of the normal playable area, but the portal to it can be opened from any obelisk or Supply Crate. When crafted, it instantly creates a portal that teleports everything in the radius in 20 seconds.