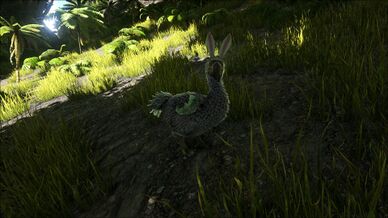 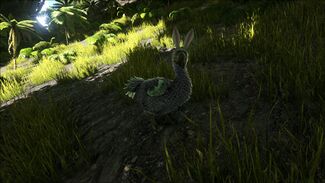 Dossier
These values may differ with what you see in-game or written elsewhere. But that is what the dossier says.
Groups
Birds, Event Creatures
Species
Unknown
Time Period
Late Holocene
Diet
Herbivore
Temperament
Oblivious
Release Versions

Bunny Egg
Habitat
Spawns only during an Event.

The Bunny Dodo is one of the creatures in ARK: Survival Evolved. It was added during the ARK: Eggcellent Adventure event.

Bunny Dodos act exactly like normal Dodos. The only difference between them is that Bunny Dodos also lay Bunny Eggs (very common around 1-3 per 5 minutes) and they have cute bunny ears on their heads. Experience from Easter 2020 showed bunnies consistently laying 1 egg every 10 seconds. They can be carried by the same fliers that can carry normal Dodos or they can be grappled and then taken by flier to a pen for farming eggs.

A flightless species of pigeon, the dodo is easily identifiable by its large beak and stout body. Bunny Dodos vary in many colors. They have bunny ears.

This section displays the Bunny Dodo's natural colors and regions. For demonstration, the regions below are colored red over an albino Bunny Dodo. The colored squares shown underneath each region's description are the colors that the Bunny Dodo will randomly spawn with to provide an overall range of its natural color scheme. Hover your cursor over a color to display its name and ID.