For the arena, see: System Root. 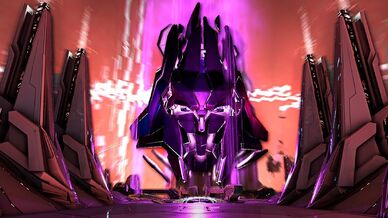 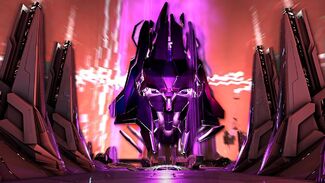 First you have to complete a certain amount of missions before you can try a encounter. You can talk to HNLA and choose "Arrival Protocol". Choose either "Gamma", "Beta", or "Alpha" to be transported to the fight arena.

This corrupted AI stands tall in the middle with a purplish hue and clad in purple armor which shatters on each phase. and in the end, when you defeat him, he reveals his own face which is surprisingly similar to Edmund Rockwell.

The Corrupted Master Controller is likely the digital final form of Rockwell, who had hacked into the Genesis program and took the form of the Master Controller after escaping Aberration. This is evidenced in the dialogue during the boss battle and the ending of Genesis Part 1 where Rockwell can be seen. How Rockwell accessed the Genesis Simulation as well as changing his appearance outside the simulation is unknown.

Anytime HLN-A and the survivor fixes a glitch that is related to Genesis: Part 1 Story, Rockwell´s interactions, overall, is him insulting the survivor about how little they know on what is really going on behind the curtains. A notable interaction is him asking what Helena, the other Homo Deus, and Rockwell himself are preparing the survivors for with the Genesis Simulation.

Master Controller is not a boss like any of the current bosses. Unlike the other bosses, he stands impervious to any form of attack, until reaching the final phase of the boss fight. There is a restriction of 10 survivors and 20 tamed creatures allowed into the System Root, which is typical of guardian boss fights on all other maps, excluding Extinction. Creatures cannot be released from

Cryopods within the System Root, but creatures can be captured. Additionally, the bodies of any Survivors present in the System Root will be transported back to the area where The Arrival Protocol was initiated upon defeat, inventories intact. Therefore, if the fight begins to seem unwinnable, it is a viable strategy to attempt to capture as many creatures as possible in Cryopods before your defeat, allowing you to preserve them to fight another day.

If you defeat him the surviving tames will be teleported from where you teleported to the arena, and all items in your inventory will be lost. to prevent this put all of your items in a surviving tame's inventory and they will not be lost. This will only happen if you have a dupe in cloud. Normally this should not happen anymore.

data keys as normal by killing off Corrupted Avatars and Dinotars. Send the data keys over to the codebreaker terminal to disable the shield protecting the Master Controller to harm him. Be warned that this is only temporary, and the boss will render himself immune after a while, which requires the whole process be repeated. It seems that there are hard damage thresholds that can't be exceeded so you are guaranteed to be doing this cycle multiple times. The maximum damage threshold you can do to the Master Controller is at most 1/4 of its health. As the fight progresses more dangerous dinotars such as Reaper and Giga variants join the fray which can deal immense damage. Attack drones will start to spawn out of control and need to be checked by AoE of sorts, possibly rockets. The thing to be wary of is that players and their tames need to kill dinotars and avatars faster than they respawn as the massive numbers can easily overwhelm players.

If you are fighting the Corrupted Master Controller solo, bring loads of food, medicine, recipe foods, armor, weapons and various types of tames on different types of behavior. Be sure to have a high damage weapon to hit the corrupted dinotar giganotosaurus as this will easily enrage them. Make sure to bring several disposable tames to the fight to make sure it goes aggressive on it, damaging both the tame and surrounding hostiles around it while you have spare tames for more mass key gathering opportunities and your main damaging force is relatively undamaged.

In the stages, make sure to remain at an area to make gathering code keys as easy as possible as running round the arena for a key costs time and your easily spreads out your tames.

Overall, DON'T EVER GET CORNERED in any stage of the fight as the Corrupted Avatars can easily shred through health and armor of both you and your tames.

Offensively you would be advised to bring powerful quality fabricated weapons such as the Pump-Action Shotgun, Assault Rifle, and Fabricated Sniper Rifle. If you are able to wield it, bringing a quality Tek Rifle is also advised since the corrupted attack drones drop element to refuel your element supply. If you have a high-quality Simple Pistol, they are effective at disposing of the attack drones that spawn. Having a close range weapon such as a high-quality Pike or Sword can help in a pinch if you boost your melee damage. A Tek Rifle is great at killing the Corrupted Dinotars during the final phase.

Giganotosaurus will periodically spawn, with even greater chance in the final phase, and as it can inflict the Gnashed effect, it can easily end up killing the dino if not dealt with.

This fight is extremely difficult due to the massive numbers of Corrupted Avatars.

Even though the Corrupted Dinotar Attack Drones aren't much of a threat, considered a nuisance on the arena and swarms of them can be taken out with a single shotgun blast, their constant ranged energy attacks can keep player's health from regenerating.

There is a glitch where the Master Controller has a specific area when his shields are down. Some of these areas include his forehead, armor, face, or even the back of his head. When a player shoots at the wrong area, no damage is being done. Make sure to bring a pistol to test out where the damage will be done. The Corrupted Master Controller can soon glitch out of the center and begin to float way above. In some instances, the Corrupted Master Controller can glitch outside the arena's barrier, making him invulnerable for the entire 15 minutes.

Despite having a seemingly endless amount of hostiles spawning, there seems to be a limit on how many Corrupted Avatars can spawn, particularly in the final phase. This is an advantage by making it a priority to kill the Corrupted Dinotars first until all that is left are the avatars, giving a small gap of rest for your tames to mop up all of the Corrupted Avatars and gather a huge amount of code keys.