This article is about Rock Drake, not to be confused with 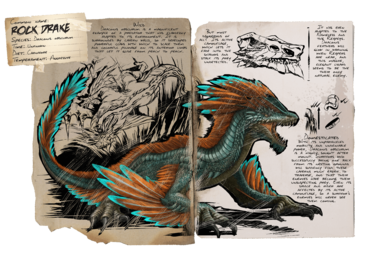 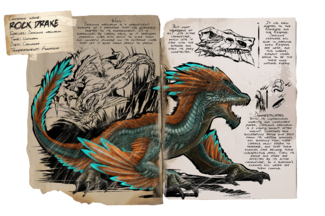 Dossier
These values may differ with what you see in-game or written elsewhere. But that is what the dossier says.
Groups
Fantasy Creatures, Reptiles
Species
Draconis obscurum
Time Period
Unknown
Diet
Carnivore
Temperament
Aggressive
Release Versions

The Rock Drake is one of the Creatures in the Aberration-DLC of ARK: Survival Evolved.

The color assigned to the third region did not exist prior to 304.1.

This section displays the Rock Drake's natural colors and regions. For demonstration, the regions below are colored red over an albino Rock Drake. The colored squares shown underneath each region's description are the colors that the Rock Drake will randomly spawn with to provide an overall range of its natural color scheme. Hover your cursor over a color to display its name and ID. 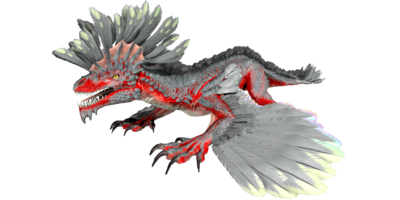 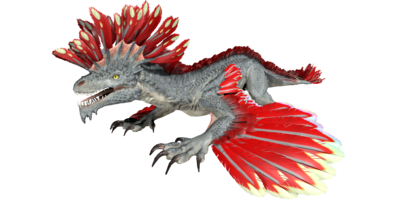 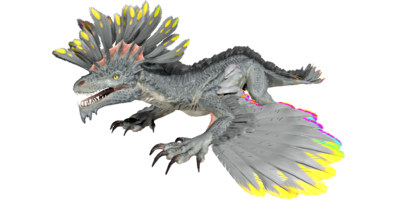 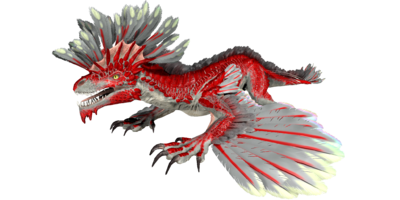 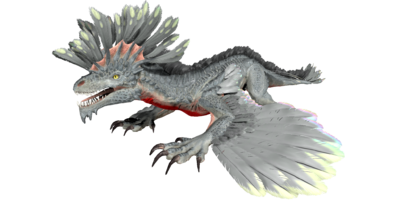 Wyvern on Scorched Earth, the

Magmasaur on Genesis,adult Rock Drakes cannot be tamed. In order to obtain a tamed Rock Drake the player must steal and hatch a

, which can be commonly found in the Grave of the Lost; a region located in the deepest pits of the Aberrant Ark, at the very bottom of the chasm between the Luminous Marshes and the Overlook.

Reaching this area on foot is of itself a dangerous undertaking; requiring hazard gear (bring spare suits, it's a long trip) to combat the

Radiation all the way to the nests, charge light to keep the

Nameless at bay, and a brief run through

Reaper Queen territory. A strong, swift mount that is immune to radiation is a must for the long road down to collect your first egg; attempting the theft without tames is more than likely suicide. A suggested route to reach the Grave of the Lost is to start on the Southern end of the Crystalline Swamps, which is Southeastern most location of the bio-luminescent chambers (the 'blue' portions of the map), and enter The Spine region from there; but be careful not to stray too far East into Element Falls, where Reaper Queens spawn en masse. From there; follow the literal, giant metallic spine overhead once you locate it, and it will guide you down to where you need to go.

Alternatively, one can reach the Grave of the Lost by literally throwing themselves into chasm from any direction; such as the bridge that juts out from the portal region, or from either side of the Luminous Marshes or The Overlook. If taking this route, be sure to have some method of controlling your descent (such as a Parachute or a Glider Suit) or your passage down will be met with a lethal impact on the rocks or pools of element below. This method also does not allow for the safe passage of whatever tames you wish to bring with you (tames that are set to follow you off the cliff can be as easily met with death from the element pools as you can, and controlling their fall is near impossible. The only safe way to bring tames down with this method is to use a Cryopod). The best method is perhaps the former one; as without a Drake to climb back up for your first theft, you will have to walk back up out of the chasm on foot. Having taken the path down by foot the first time, you will be familiar with where you have to go in order to escape back to base with your prize. Climbing all the way back up from the deep trench using Climbing Picks is also ill-advised, as most are not durable enough to last long enough to do so, and the frequent earth quakes are likely to dislodge you in the process.

Once in the Grave of the Lost, there are two nesting grounds to choose from; one on the Western half of the chasm, and another on the Southern side of the chasm, near two element waterfalls, which are passed on the way down. To the far North side chasm is the terminal that allows entrance into Rockwell's arena.

Once you have found the actual nests, there are yet more hurdles to cross than just the dangerous trip down. The nests themselves are located on the walls of numerous small chasms, that spread throughout a miniature cave system along the Southern and Western half of the Grave. Some of these chasms can be entered and exited on foot, but these are few compared to the areas that if a tame does in fact fall into the ravine, most creatures will not be able to crawl back out. Tamed Reaper Kings, Karkinos, and Rock Drakes are among the few, if only creatures that can escape these pits, unaided by Cryopods or Tek Teleporters if they do in fact fall in, so be very mindful of where you step. If the tame you brought down with you cannot jump out of these chasms, they will have to be left behind up above while you climb down with climbing picks to snatch an egg. If you are going after your first egg and do not yet have a Rock Drake of your own, a tamed Reaper is by far the second best option for this task; able to get in and out of the chasms, jump to most if not all nesting alcoves along the wall, and is more than capable of taking down mass swarms of angered Drakes.

Once an egg is stolen, the nearby Drakes will begin to swarm and attack, which can be deadly if you have not yet reached your mount. A good strategy is to target and kill any and all Drakes you find before snatching the egg; using a long ranged weapon to tag one and bait it into combat with your mount. This can be rinsed and repeated with as many Drakes you think you can handle at once, until most or all have been dealt with, but always assume there is one camouflaged somewhere that you missed, and be ready for a swift retreat to your mount once an egg is grabbed.

Quetzal in lowest temperature requirement to hatch. Hatching the egg requires a massive amount of air conditioners (at least 20, depending on the temperature of the surrounding) or a group of Dimetrodon (numbers required vary, depending on each Dimetrodon's damage level) with high damage stats to increase their insulation. You need roughly 2500 Hyperthermal Insulation (as shown on your character screen).

Once hatched, the babies cannot be fed

Raw Meat like most other carnivores. Like Wyverns, they require a special food to raise them, and will not consume meat until they are fully grown. Unlike Wyverns however, the act of getting this food is far easier than having to tranquilize a wild female for milk. Growing young Drakes require

Nameless Venom to stave off starvation; each feeding providing 400 food points, and they may even ask for it when imprinting. This venom is rarely obtained from killing (and harvesting from)

Nameless, an easy task if you have a good, strong mount, and simply walk around the bio luminescent region (or specific location in Element Region, and surface cave entrance of Fertile Region) of the map without a charge light to draw them out. While baby Drakes lose food points more slowly compared to other young creatures much like baby Wyverns, it is still a good idea to build up a small stockpile of venom before hatching the egg. The venom spoils quickly in a player's inventory, but can last for several hours in a tame's, and even longer in a Preserving Bin.

For a possible means of finding out what your baby Drake will be like before it hatches, like Wyverns, the colors and stats of the baby that hatches out of the egg is dependent on the parent that laid the egg in the nest. For example, if the parent that was guarding the egg has a green body Region one and sky blue body Region 5, the baby will hatch with the the same colors. The stats the baby is born with are determined the very same way. Finding out which egg belongs to which Drake though can be rather difficult, as there may be many Drakes with the same level around the eggs that they guard.

An important thing to note; if you chose to hatch your Drake in an inside, protected area, adult Rock Drakes do not fit through Dino Gates or the Giant Trapdoor. If you haven't built a Behemoth Gate then make sure to get the adolescent drake outdoors before it fully matures.

Many players will find that once they have a high-level rock drake tamed, it becomes their main tame. Simply because of how easily it can get around and explore on aberration.

Rock Drakes cannot have their speed stat leveled, like flying dinos. However, unlike flying dinos, Rock Drakes can swim (and are faster in water than running on land), do not dismount the rider upon entering water, and can attack while swimming. Not only that, but the Drake can launch itself back out of the water and directly into a glide, allowing it to rapidly move around a body of water, or quickly reach shore to escape an underwater threat.

Similar to the Glider Suit, the Rock Drake must maintain speed by sloping downward slightly while gliding or it will stall, causing it to pitch downward sharply. While gliding, if the Rock Drake is close enough to a surface (which is a pretty good distance, 20-25 foundations), a blue crosshairs will appear while looking at the surface.

If the rider left clicks with this crosshair up, the Rock Drake will pounce forward towards that surface and then cling to it (automatically engaging wall climb mode, if necessary). Unlike the glide, this jet doesn't have any issues with going upwards, and the rider can pitch the camera sharply upwards and trigger the pounce before stalling, causing the Rock Drake to pounce to a significantly greater height. This pounce is also available while moving around on the ground, with similar effect.

To enter climb mode (where the drake will automatically climb up and walls you walk up to) press right mouse on a PC, L2 on a PS4, and LT on an XBOX.