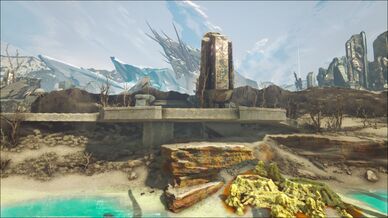 The Delta Tower is a region in the Extinction DLC.

Delta tower is a set of ruins situated in the south east of the Extinction map, going by the texture used on the ruins it can be said they are part of the Sanctuary.

It is surrounded by the Sulfur Fields on nearly all borders, with the exception of a small lake that makes up part of a river flowing through the Wasteland.

Noted on single player (not tested on official or unofficial servers) but it appears that there are few Dino spawns in this location, with the most lethal corrupted creature being a spino or a lone stego, making it abnormally safe for the Wasteland

However the area around the tower can yield Corrupted Rexs and hordes of other corrupted creatures.