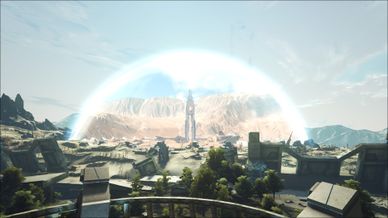 The Desert Dome is a region in the Extinction DLC.

The Desert Dome houses the Red Obelisk and the Desert Cave which leads to the Desert Titan Terminal. It is inhabited by creatures that are typically similar to the ones on Scorched Earth, such as

Lymantria. The Desert Dome can be extremely dangerous at times, as the threat of a

Velonasaur is always a possibility. Geysers can be found throughout the dome. The Temperature is 15°C or 59°F to 25°C or 77°F so Food and Water is Needed.

See more details about dealing with the

Desert Titan in its respective page.

Desert Titan is bring formed on the arena and begins to attack the moment it is fully materialized.