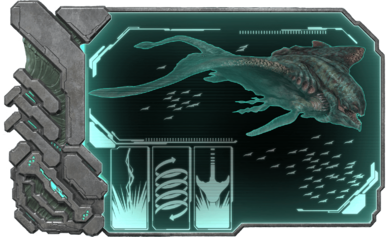 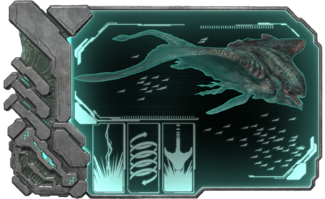 The Desert Titan is one of the Creatures and one of four Titans in the Extinction DLC of ARK: Survival Evolved.

The Desert Titan, a.k.a the Sky titan, is an aggressive creature. It has small but powerful minions called the flock, that follow it and attack to protect the Desert Titan. The Desert Titan can also summon lightning strikes from the sky.

The Desert Titan bears a resemblance to a hellish manta ray with blue coloring, razor sharp teeth, piercing eyes, gills, multiple fins on its underside, a large paddle like tail, barnacles growing on its wings and an eerie purple glow.

The Desert Titan always spawns with the same color scheme and has no color regions.

This means it is currently impossible to make alterations to the Desert Titan's colors.

Items
The item entry "Items" contains at least 1 and at most 2 of the following items.
as item or as blueprint
with quality 180% - 300%

Items
The item entry "Items" contains at least 1 and at most 2 of the following items.
only as blueprint
with quality 180% - 300%

Desert Titan
The stat-calculator does not work in the mobile-view, see here for alternatives: Apps Note that after the creature is tamed it gets bonuses on some stats depending on the taming effectiveness. This makes it hard to retrieve the levels on a tamed creature, so this tool is only for wild ones, but gives a first impression, how well the stats are distributed.

This section describes how to fight against the Desert Titan.

Due to its ability to fly the average strategies are rendered for the most part useless.

To take down the flock, shoot them with a high-tier Assault / Tek Rifle while they are flying away from you. Shooting at their sides or heads will yield no damage and if they've targeted you, it would be much easier to shoot them from behind.

Put a giga on a quetzal platform saddle and kill this thing in 3 minutes.

The lightning attack starts with marking targets, targeted players or creatures will be given a Marked for Lightning status effect. After this status effect expires (4.5s), the area around the player or creature is lit up with lightning, which doesn't do damage immediately, but indicates the area will be struck by lightning within a few seconds. However, in the case against a wild Desert Titan, the timer between marking and striking the lightning are erratic; it would take either between a second to a minute, for the lightning to strike, making timing for it invalid.

The lightning attack can deal tremendous damage, but is avoidable due to the long charge-up period (unless you are dealing with a wild, which in this case, the charge-up period will either be long or short). If you hear a noise that sounds like a crackling fire, it means you're too close!

The flocks act as a close range guardian for the desert titan, attacking players and mounts that get too close to the desert titan, a message will appear when you are targeted by a flock, the flock can also deal heavy damage and is more than capable of killing under armored players in 1-2 strikes. As of update v287.110, Flocks will also dismount players hit.

These attacks are focused on players and creatures that manage to board the desert titan's back. You can predict this attack by keeping a careful eye on the Titan's tail, which will begin to lift when it's about to perform a Tail Slap.

Desert Titan, other than its constant swing and tail strike, is at its weakest when attacking close by. Be mindful of the flocks and lightning it gives and this weakness can be exploited.

If you are planning on taming the Desert Titan, you must destroy the Corruption Nodes on its back while dealing as little damage as possible to the Titan itself, as the amount of damage you do will affect its' HP after the tame is complete.

The Desert Titan is tamed by attacking the corruption nodes on its back in a designated sequence. These nodes will only spawn after they have been struck by a Lightning Strike from the Desert Titan. After all corruption has been destroyed, the Desert Titan will be tamed and will come pre-equipped with a special

Platform Saddle. The saddle placement varies per Titan and the Desert Titan can be controlled via a special cockpit area on the saddle.

Titans from starving to death even if playing on single player and adjusting the Raid Creature setting. This is likely a bug.

Quetzal with a platform saddle that encases the rider and hover above the corruption on one wing, and when it says you are being targeted by the titans lightning attack try and get as close to the corruption as possible, and if you did it right when you are struck by lightning a structure on top of the wing should form. Destroy this with your Quetzal, level up health and damage, and then repeat for the other wing and then the body. Be careful not to land on the creature, because it might roll to buck you off and the fall damage will kill unprepared players, as well as the desert titan flock, which will attack you while you are attempting this. If you do not encase the rider's seat with a sealed box you may get dismounted by the flock. Try to do as little damage as possible to the creature itself, as this will reflect on the health of it when tamed.

The following items are needed to open the Desert Titan Portal:

Mobile base: Due to all of them having a platform saddle, this role is also for the other two Titans. Still, the best option for this role is the Desert Titan. Although you can’t improve its speed, it has the ability to fly. Its turning radius is very large compared to most adept flyers, but it can maneuver in all three dimensions. It also has the biggest platform to build on.

Pack Mule: While its own weight isn't phenomenal (and cannot be improved): the weight of creatures, players and structures on its back is not added to its own weight. In addition, the 'Desert Titan Gravity' buff you get while standing on top of the titan allows you to move regardless of how much you're carrying (albeit at the encumbered movement speed). This buff lasts for a few seconds after getting off the titan.

Flying Aircraft Carrier: Since it has the largest platform, the desert titan can be a mobile and airborne landing zone for other flyers so flyers don't have to land on the ground to regain stamina and removes the flyer's risk of attack from land creatures.