Difficulty in ARK: Survival Evolved affects the levels of creatures in the world as well as the quality of loot drops. It is not entirely straightforward, however, as this page shows.

To calculate the Difficulty Value for a specific Difficulty Offset, use the formula

Rock Drakes is even higher than the maximum creature level of the other creatures. After the change of your GameUserSettings.ini execute a DestroyWildDinos command to get rid of the creatures which spawned with the previous difficulty.

Finally, the Loot Scale is simply the Difficulty Value expressed as a percentage:[2]

Although it's called difficulty, having a higher one makes your life harder if you are naked, but it may actually make the mid or end game easier as better loot crates as well as better tames are available, therefore increasing the effects of taming efficiency. See the following chart, a higher difficulty increases the gap between the wild and (perfectly) tamed creatures. 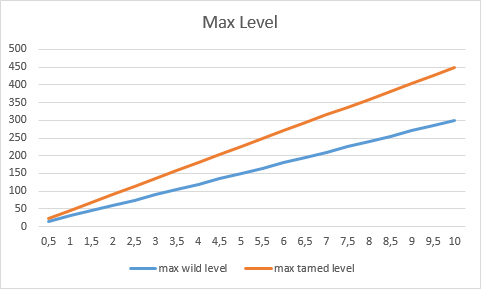