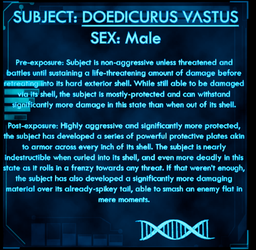 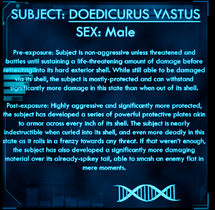 Wood
Habitat
The Doedicurus Vastus Arena, accessible through the Boss Teleporter in the Diminishing Grove of the Titan, The Abysmal Wilderness, and the Pit of Opulence.

The Doedicurus Vastus is one of the Creatures in ARK: Survival Evolved Mobile.

The Doedicurus Vastus always spawns with the same color scheme and has no color regions.

This means it is currently impossible to make alterations to the Doedicurus Vastus's natural spawn colors.

This section describes how to fight against the Doedicurus Vastus.