This article is about the uses of a tamed creature. For the process of taming a creature, see Taming. 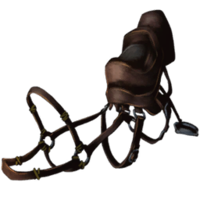 Domestication is the process of converting wild creatures into useful beasts of burden for the player's benefit. Domesticated creatures have many different advantages that make life easier on The Island. Some creatures allow the player to harvest resources more efficiently than the player can by hand, while others can transport huge amounts of goods or lead the charge in war. However, before a creature is domesticated, it must first be tamed. Additionally, some creatures require a saddle to reach their full potential.

Domesticated creatures follow orders given to them. The player can set their Aggression Level, order them to stay on a place, follow a player or wander around. To change their behavior, stay close to a creature and hold use (default E) or use whistles. The player can mount on domesticated creatures to fight other creatures and players, and move, using the creature's stamina instead of the player's stamina.

Creatures have their own hunger bar which drains for the same reasons that the player's does: to refill stamina, to provide healing, as well as steadily draining over time on its own. A creature will bias towards eating its least favorite valid food before those that it would prefer. For example, a carnivore will eat any

Raw Meat in its inventory before eating

Raw Prime Meat and an herbivore will save its preferred berry for last.

At rest (while not being ridden or recovering health or stamina) a creature will lose 0.1 hunger approximately every 35secs. This means it will only need to eat once every (35secs X 500 units of hunger =) 17500 seconds, or 291.67 minutes, just shy of 5 hours, while at rest if its inventory only contains raw meat. This is significantly longer than any type of meat will last in its inventory before it will spoil, and feeding large numbers of creatures purely on kibble is almost impossible for even the most established players. For this reason, unless you need Spoiled Meat for Narcotics, it is recommended you do not keep food in an idle creature’s inventory as it will spoil much faster than it will be eaten.

Herbivores use identical mechanics to carnivores, but due to the fact they are relatively easy to feed (one low level Trike is able to collect hundreds of berries in only a few minutes) it is less of a concern for these creatures.

"Remote Use Item" is a command that allows players to force feed an item to a creature. This can be done while an animal is unconscious or conscious. Usually Narcoberries are Force Fed, in order to keep the animal's Torpor in check. If possible, it is recommended to use Narcotics since they don't spoil and can be turned into Tranquilizer Arrows if you underestimated the creature you were trying to tame.

Feeding Trough is a much more efficient way to feed multiple animals — especially while players are logged out of the game. Once a players puts food in a Feeding Trough, all nearby animals will eat whenever they are hungry. This makes it easier to manage the hunger levels of many creatures while preventing extra spoiling of food items.

The attribute Melee Damage influences the gathering of resources. Note that not all creatures are listed. Refer to the resource page for a complete list of creatures and tools gathering that particular resource. Creatures are ordered from high to low efficiency, but the table also shows the gathering rate of the tools for comparison purposes.

Given is the base Weight for level 1 creatures. Note that not all tameable creatures are listed. Refer to each creature page for more information.

Given are the numbers of Melee Damage and the Health at level 1. Note that not all tameable creatures are listed. Refer to each creature page for more information.

Aberrant dinosaur have reduced health with increased damage, and are not listed here for clarity sake.

For scouting and exploring the attribute Movement Speed is most important. As the numbers are not given absolutely, this table is qualitatively based on experience. Air creatures can no longer have their movement speed upgraded so animals like the raptor, Thylacoleo, and sabertooth can be better for exploration

Some creatures have the ability to emit Charged Light, making them valuable in certain locations within Aberration and caves if exported to other maps.

Apart from producing poop some creatures can produce valuable resources that can be harvested from them.

Some domesticated creatures collect resources by themselves when left on 'enabled wandering' (set by holding E near the creature). Just leave the creature wandering near the resource and take the collected resources from time to time of its inventory.

Some creatures can perform unique actions, making them valuable in certain situations