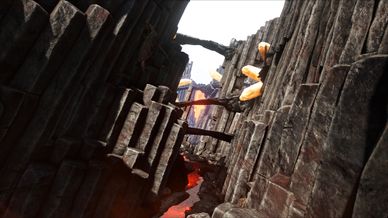 Dragonmalte Trench (also known as Dragon's Trench or Wyvern Trench) is a location in the DLC: Ragnarok.

This Wyvern-filled trench is where players can find

Ice Wyvern Eggs as these can only be found in the Murder Snow, which will allow them to raise their own

The entrance to Fafnir's Cavern is found here.

This trench is much like the World Scar from Scorched Earth, although it is wider and has more Wyverns.

The trench is right next to the lava biome and the lava mountain. These mountains are dangerous and contains high level dinosaurs. It is recommended not to go there. Bringing extra armor is also a good idea as the Arthropluera (which spawns on The Island, Ragnarok, Valguero, Aberration, Scorched Earth, and Extinction) can use their acid attack and deplete it. If you feel confident, you can attempt to knock out a female Wyvern or kill an Alpha Wyvern which gives you 50 Wyvern milk. Killing a regular female wyvern is a waste of time, however, as milk can only be collected from a unconscious female wyvern. This will help you in the process of imprinting and raising the baby Wyvern.