Edge of the World (The Center)

From ARK: Survival Evolved Wiki
Jump to: navigation, search
Edge of the World 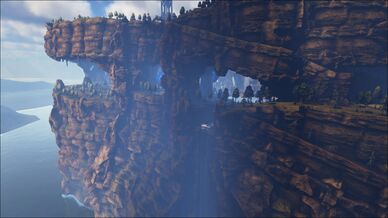 The Edge of the World is a feature in the DLC: The Center.

The ocean at the bottom has no physical seafloor—instead, it is only a few meters deep before the barrier prevents swimming down further. In addition, no creatures will spawn in this ocean.

Players and creatures that fall into the ocean below can find one ramp each along the northern and southern edge of the Snowy Grasslands, which will lead back up to the caverns. Near the top of these ramps are another set of ramps that lead from the caverns back up to the mainland, with a third ramp just south of The Bridge.