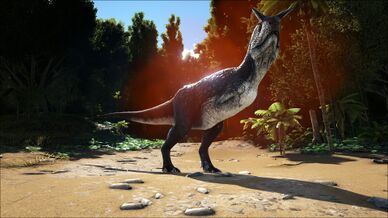 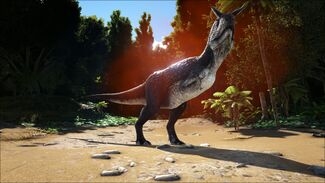 The Alpha Carnotaurus is one of the Alpha Creatures in ARK: Survival Evolved.

The Alpha Carnotaurus is a bigger, stronger version of the

Carnotaurus. In addition to their own strength, they also buff the damage and resistance of any nearby wild carnivores. They pose a significant threat to any players who aren't fully prepared to encounter one.

Alpha Creatures cannot be knocked out.
Defeating an Alpha Carnotaurus grants a large amount of XP and gives all nearby players a

Rex Bone Helmet. They also frequently drop recipes, high-quality weapons and armor, and various other items.
Alpha Carnos do not drop normal raw meat when harvested. Instead, they give very large quantities of

Relative size in comparison to a regular Carnotaurus and a Rex.

The Alpha Carno is about 1.5x the size of a normal Carno and share the same color palette, but with a slightly darker shade. They also have a glowing red aura surrounding them, making them easier to differentiate from the normal counterparts. 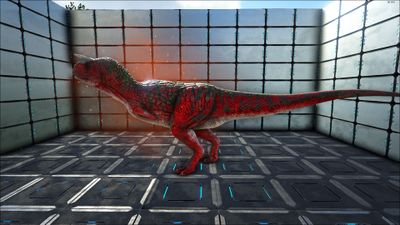 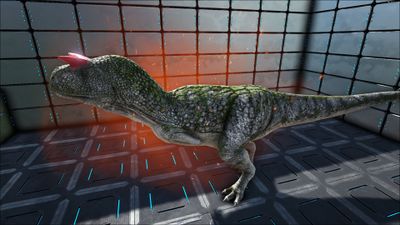 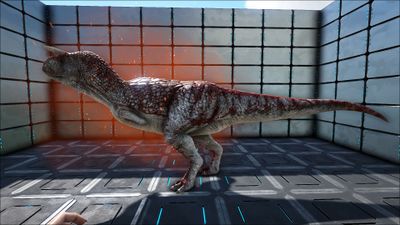 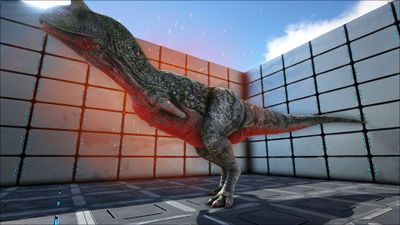 This section describes how to fight against the Alpha Carno.

The Alpha Carnotaurus is an extremely deadly predator, but taking it down is worth the XP. Use all of your resources available, including tribe members, powerful mounts and your strongest weapons. Avoid as much physical confrontation as possible. It also gives the best loot of the land alphas, so killing one for Ascendant/Mastercraft gear is a good thing.

Avoid the extreme damage by waging a ranged battle. If that is not an option, guerrilla tactics with a speedy mount is acceptable. A high health, stamina, and damage

Spino can usually fight a similarly leveled or lower level Alpha Carnotaurus one-on-one and win if it's mounted; but bringing another dinosaur, especially one that can Mate Boost to the mounted combatant is definitely a good idea. A tamed

You can also solo the Alpha Carnotaurus with a

Baryonyx in the water if you stun it and beat it down. Be mindful of when the stun ends however as when it ends you can find yourself with a Carnotaurus that can deal critical damage to you in several seconds.

The damage, health, and speed all combine to make the Alpha Carnotaurus a notorious killer of small establishments and massive regimes alike. Don't let it get near your livestock! A determined Alpha Carnotaurus can even chew through stone walls eventually, so keep your animals away from any fencing to stop it from refreshing its aggression to get to them.

Try to stand on a very steep hill. Then simply get a ranged weapon, stand far back, and fire away! Alpha Carnotaurus are very slow swimmers so taking the battle to the water may be advisable, especially if powerful water mounts like a

Brontosaurus can use that reach to carve up the Alpha Carnotaurus' health without getting hit back.