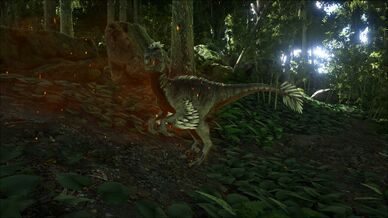 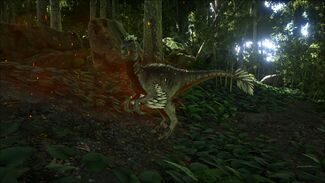 The Alpha Raptor is one of the Alpha Creatures in ARK: Survival Evolved.

The Alpha Raptor is a bigger, stronger version of a Raptor which rarely spawns throughout the island. In addition to their own strength, they also buff the damage and resistance of any nearby wild dinos. They pose a significant threat to any players who aren't fully prepared to encounter one.

Alpha Raptors do not drop normal raw meat when harvested. Instead, they give very large quantities of

The Alpha Raptor is much like the normal Raptor. They move extremely fast and do large amounts of damage. This makes fleeing from one difficult, so it is not advisable to get into a fight with one unless you're prepared to see the battle through. The Alpha Raptor has an enormous amount of health like the Alpha T-Rex and Alpha Carno. It can easily destroy non-metal buildings, so it is not advisable to hide from or fight one from inside your base if it is not built to withstand one. The Alpha Raptor has an increased jump height compared with other dinos to get behind its target. 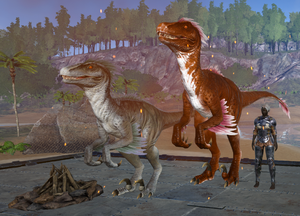 The Alpha Raptor is about 1.5x the size of a normal Raptor and share the same color palette, but with a slightly darker shade. They also have a glowing red aura surrounding them, making them easier to differentiate from their normal counterparts. 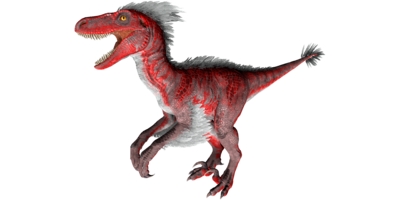 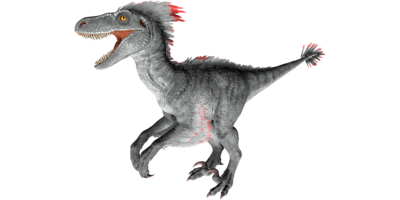 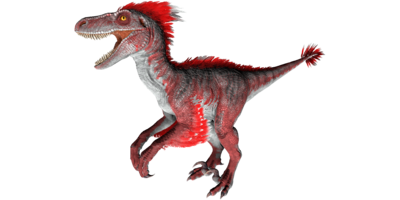 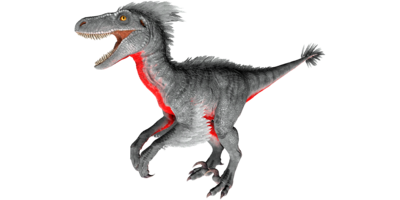 This section describes how to fight against the Alpha Raptor.

Know your strategy before the confrontation. The worst time to encounter/battle an alpha raptor is when the player is unprepared. Use all resources available to take it down, and do not be afraid to do battle with a tamed creature, as long as it has high levels in combat sections like Health and Melee damage. Take into account that the alpha can shred its prey if it catches it. If it gets its claws on the player, the player must turn and face it down. At that point, it is strictly a race to kill the other opponent. Employ pikes, swords and spears so you aren't the loser!

The easiest method to kill an alpha raptor requires a Raft and at least two people. Lead the alpha into the water and have someone drive the raft away from the raptor, as long as it is swimming, it will move slowly. Shoot it while it follows you in the water and it should die after a while.

Another Strategy is to use a high leveled Argentavis - make sure the Argentavis is leveled up in health/stamina /damage. It is recommended not to use the stamina for anything except attack. Fly slow and attack just above the Alpha's head. This will limit the incoming damage, but be aware you will need to perch on a rock high enough to regain stamina while the raptor tries to attack you. Be smart and the fight will end shortly.

A third strategy is use a Quetzal with a Ballista built on its platform saddle. Any Emplacement should suffice, however.

Using a Pteranodon is useful; the barrel-roll (default C) allows you to hit the enemy without getting hit in return.

You can also use a raft with Plant Species X grown on it and lure the alpha away and just go along the shore.

One other viable means of attack is a pack of high level Allosauruses. The pack boost is a must, (and mate boost for added attack and damage reduction) as it will gnash the Alpha and cause it to bleed. An allosaurus pack is particularly useful for mobbing an Alpha Raptor as their rapid attack speed and good reach make it hard for the Alpha Raptor to get many return hits in. Never take just one Allosaurus, as it will not survive the encounter. A pack of three health/stamina/melee damage Allosauruses can take out a level 5 Alpha with minimal issues so long as you make sure the pack is attacking relentlessly. The higher level the individuals, the higher the Alpha they can topple.

A mid to high level Therizinosaurus can be used to duel a mid level alpha raptor, their damage output and fast attack rate can keep the alpha raptor far enough away to effectively fight it.

You can also build a cage of metal on a raft and use yourself as bait to get it in. Once it's in, close the door behind and pepper it with range attacks.

A Cheap Strategy to duel an Alpha Raptor is using Carno, it's headbutt can duel considerable knockback to the Alpha before it reach you, although your Carno's stamina may run out, but keep headbutting the Alpha to make the best effort, make sure there's no other Alpha's allies(Such as Dilophosaurus, Raptor)

Another fairly cheap strategy is taming several (at least 3) Carbonemys, and facing down said Alpha, preferably with you unmounted, jabbing with a pike or spear. The reason why is because of the turtle's high armor and good health. The raptor will be distracted by the turtles, so if you go behind it, you can stab it to death quite easily.

When barely starting a great method is to wait for a low level alpha raptor to kill a wild dino and keep biting its corpse. The corpse will not be consumed which gives you the perfect opportunity to shoot it with arrows. Be wary of other dinos that may consume the corpse and always try to find an unreachable place the alpha can not reach you. Ex.( high rock, a cliff)

Another Strategy is to make 1 Stone Foundation and 4 Stone Door frames and make a trap where you place the Foundation and then place 3 Stone Door Frames in a U shape on the Stone Foundation then with a Pteranodon attack the Alpha Raptor once then lead it into the trap which the Alpha Raptor will take agro on and and then you can either get off of your mount and place the final Door Frame to lock in the Alpha Raptor or you can stay on your mount and place the final Door Frame and from there you can attack it and kill it in whatever way you like but the preferred method is to use a crossbow and arrows. On a sidenote because the alpha raptor can damage stone it is recommended to only trap low level raptors this way as higher levels can break out before you can kill it.

Use ranged weapons and mounts to deal damage from far away. If physical confrontation becomes relevant, use pikes, swords and spears. Do not run, as such an attempt will turn out fruitless. Use everything at your disposal, including the terrain. Lodging the raptor in rocks or trees can save your life, and possibly end the raptor's.

The alpha raptor is extremely fast, and you will most likely never escape one unless you have a flying mount or a high level Galimimus. If you find yourself in a fight with an alpha raptor head for the water, the alpha raptor will almost always be slower than you in water. The alpha raptor also deals massive amounts of damage, so if you are not ready to fight one, it is highly recommended to not approach it.

Unlike regular raptors, Alpha Raptors do not pounce so there is no worry for it dismounting you from your tame. This does not stop other raptor allies from joining the fight and pouncing you as well.