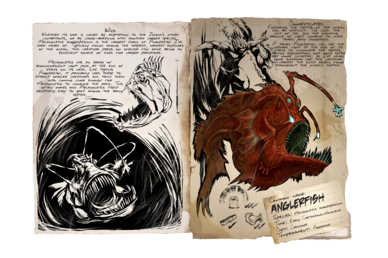 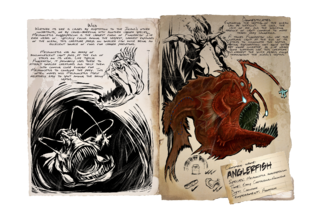 Dossier
These values may differ with what you see in-game or written elsewhere. But that is what the dossier says.
Group
Fish
Species
Melanocetus anglerpescum
Time Period
Early Cretaceous - Holocene
Diet
Carnivore
Temperament
Aggressive
Release Versions

The Anglerfish or Angler is one of the Creatures in ARK: Survival Evolved.

Despite being described in its Dossier as being generally skittish, the Angler will attack the player and any tamed creatures on sight. When damaged in a fight, they will attempt to flee but will turn around and attack again after a short chase.

This fish has three bio luminescent lures on its head and an oversized mouth lined with long, needle-like teeth to capture prey, perfect for survival in the lowest depths of the Island's ocean.

This section displays the Anglerfish's natural colors and regions. For demonstration, the regions below are colored red over an albino Anglerfish. The colored squares shown underneath each region's description are the colors that the Anglerfish will randomly spawn with to provide an overall range of its natural color scheme. Hover your cursor over a color to display its name and ID. 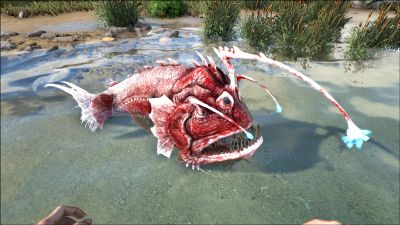 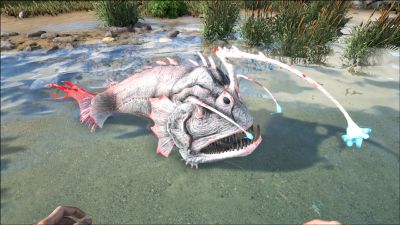 Since the Angler lives deep underwater, the only way to knock it out is with a Crossbow and Tranquilizer Arrows, a Harpoon Launcher with Tranq Spear Bolts (or a Wooden Club, if you're feeling adventurous). Be careful to not deal too much damage at once, as it has relatively low health compared to its torpor, so it's easy to kill it accidentally. The Angler can also deal a decent amount of damage itself, so be sure to suit up in a full set of SCUBA gear. Once they take a bit of damage, they will attempt to swim away. Be careful if you chase them, as they will often turn around and attack again without warning.

A good strategy is to bring a tough underwater mount, such as a Plesiosaur, and set it to passive. That way, once it has been shot, the Angler will target your mount instead of you, giving time to take it down in relative safety.

This section describes how to fight against the Angler.

One must first take into consideration the environment that the Angler lives in, the deep ocean. Other animals patrol these waters, making Angler combat or taming difficult. Ichthyosaurs, though friendly, tend to swarm the player and can easily become overwhelming if one attracts the attention of too many of them. Additionally, predators like Megalodon, Mosasaurs, and Plesiosaurs can attack at any time: even the Anglers themselves are dangerous. Finally, asphyxiation and temperature hazards will finish off any survivors rather quickly that have not equipped themselves with a full set of SCUBA Gear.

Often, the Angler will be the one attacking you. In that case, use your mount if it has enough health and attack damage, but also make sure your mount has a quick turning circle to compete with the angler's agility. Fighting the Angler without a mount is also possible; use ranged melee weapons that can keep Anglers at bay, like Pikes (Spears are not recommended due to break chance) and when it runs away, use a Crossbow or a Harpoon Launcher to finish it off.

Use a Crossbow or Harpoon Launcher for ranged, and a Pike or Sword for melee. A powerful mount can also deal with anglers.

When chasing it, be aware that it can turn around and attack again. Also make sure to keep an eye out for other, dangerous animals.

When compared to other marine predators, the Angler has a low threat level.

Note that the Angler does not require a saddle to ride, making it a decent mount for seafaring survivors that are short on resources.

For information pertaining specifically to the real-world Anglerfish, see the relevant Wikipedia article