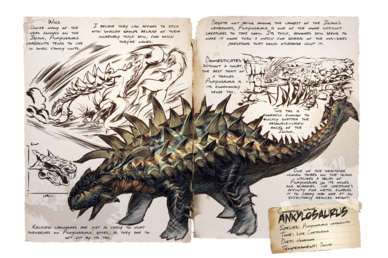 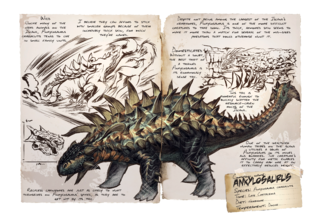 Dossier
These values may differ with what you see in-game or written elsewhere. But that is what the dossier says.
Group
Dinosaurs
Species
Ankylosaurus crassacutis
Time Period
Late Cretaceous
Diet
Herbivore
Temperament
Docile
Release Versions

The Ankylosaurus (an-KYE-low-SAWR-us), also referred to as the Ankylo or Anky, is a species of Dinosaur in ARK: Survival Evolved.

Ankylosaurus can be found peacefully wandering around the Island. They will not attack unless provoked, and since they can deal a devastating blow with their tail club if angered, it is best for survivors to leave this beast alone. They have a very low movement speed on land but can move significantly faster in water.

Ankylosaurus is a species of medium, quadrupedal herbivore that inhabits the ARKs. Its skin is adorned with a thick coating of spikes, bony plates, osteoderms, and fused bone. The head has plentiful spikes, as well as a beak at the tip of the mouth and enlarged nasals. They are relatively low to the ground with short legs and a low head; they protect themselves by wielding a wicked club on the end of their muscular tails. The only region not covered with body armour is the belly.

This section displays the Ankylosaurus's natural colors and regions. For demonstration, the regions below are colored red over an albino Ankylosaurus. The colored squares shown underneath each region's description are the colors that the Ankylosaurus will randomly spawn with to provide an overall range of its natural color scheme. Hover your cursor over a color to display its name and ID. 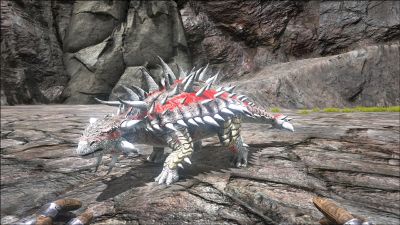 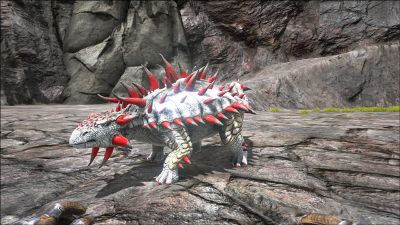 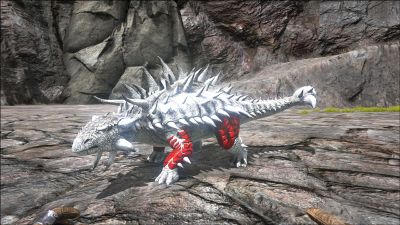 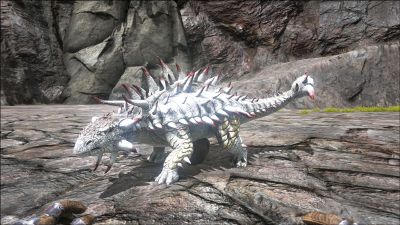 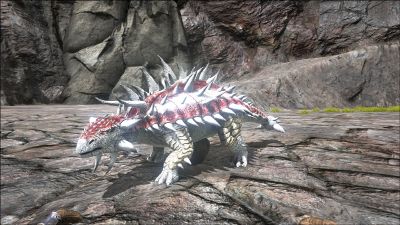 Region 4: Head and Back 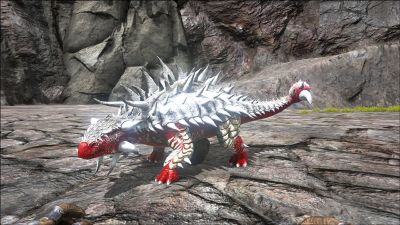 Ankylosaurus is relatively easy to knock out due to its slow movement speed. Even when attacked, the Ankylosaurus is easy to outrun, making nearly any ranged attack effective. The best method to knock it out would be using Tranquilizer Darts or Tranquilizer Arrows, but if neither are available then a simple Slingshot will do the trick but may take longer than a tranquilizer dart or arrow. Since the head of Ankylosaurus is covered in heavy armor, much like the rest of its body, it does not have a damage multiplier there- this means that it will take an equal amount of damage regardless of where on the body it is shot.

This section describes how to fight against the Ankylosaurus.

The Ankylosaurus uses its huge, literally 'bone-crushing' tail to attack its enemies. Its attack can be quite devastating if a survivor is wearing anything weaker than Chitin Armor. It is recommended then to either shoot it with a Ranged Weapon or use a Pike or Spear while circling it.

The most successful strategy for killing an Ankylosaurus is to circle it while shooting it with a ranged weapon like a Bow, Crossbow, or any variety of gun. Be prepared for a moderately lengthy battle if you are using low-level weapons.

Ranged weapons are recommended when fighting an Ankylosaurus. These weapons include Bow, Crossbow, Longneck Rifle, and others, though with some persistence a Slingshot will also work. Melee weapons are generally discouraged, though more nimble survivors might have success using Pikes and Swords if they are able to quickly move in and out of its attack range, or even bringing a

Shield can work as well.

The Ankylosaurus uses its huge tail club as a defensive weapon: this attack has a fairly large range and can deal a respectable amount of damage, so keeping your distance is a must.

Much like Carbonemys, you can outpace it by just moving backward, which you can stabbing it to death, but be aware that Ankylosaurus does more damage than Carbonemys.

The Ankylosaurus reduces the weight of the following resources by the listed amount while they are in its inventory:

For information pertaining specifically to the real-world Ankylosaurus, see the relevant Wikipedia article