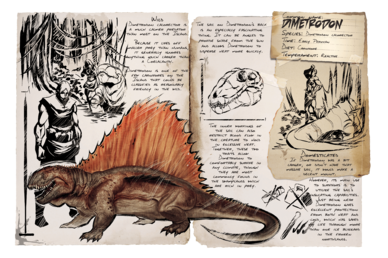 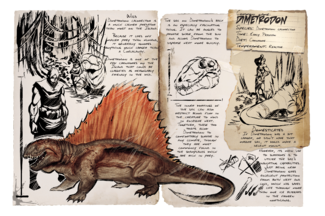 Dossier
These values may differ with what you see in-game or written elsewhere. But that is what the dossier says.
Group
Synapsids
Species
Dimetrodon calorector
Time Period
Early Permian
Diet
Carnivore
Temperament
Reactive
Release Versions

This article is about Dimetrodon, not to be confused with

The Dimetrodon (di-met-ro-don) is one of the creatures in ARK: Survival Evolved.

A sail-backed quadruped found exclusively in the island's central swamps, Dimetrodon is reptilian in appearance but in truth is more closely related to mammals. The large sail on its back serves a thermoregulatory function, as it cools the animal on hot days and helps keep it warm on cold ones. They are fairly timid and sluggish, specializing in hunting prey that is smaller than themselves.

This section displays the Dimetrodon's natural colors and regions. For demonstration, the regions below are colored red over an albino Dimetrodon. The colored squares shown underneath each region's description are the colors that the Dimetrodon will randomly spawn with to provide an overall range of its natural color scheme. Hover your cursor over a color to display its name and ID. 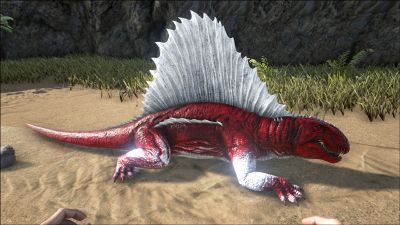 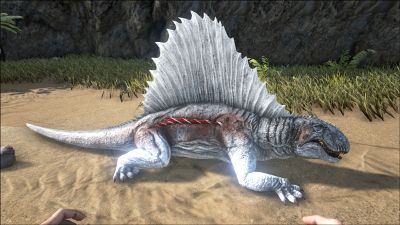 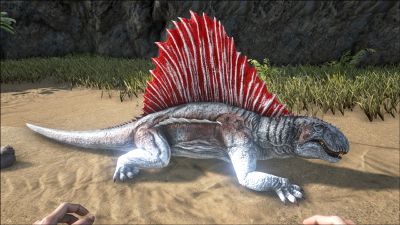 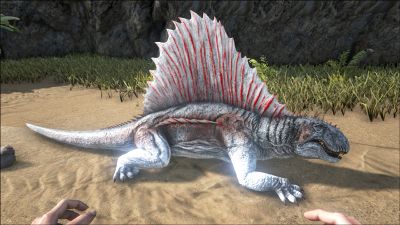 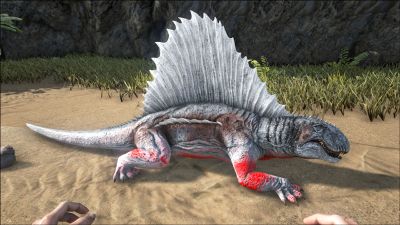 This section describes how to fight against the Dimetrodon.

The Dimetrodon is very slow and easily killed. It takes time to knock one out due to their quickly dropping Torpor, but their slow speed makes this process easy. Keeping a volley of tranq arrows or tranq darts flying its way can knock it out. Using a club is not recommended.

The Dimetrodon doesn't require much strategy to kill or take down in order to tame. A KO or kill is easily achieved by slowly backing away and either stabbing it with a Pike or Spear or by shooting it whilst either backing up or, due to its wide turning radius, circling the creature. Employ the same strategy for taming, albeit with tranquilizing weaponry. Be ready to jump on it with lots of narcotics!

Ranged weapons excel in killing and knocking a dimetrodon on land because of their slow movement speed. Use ranged tools in taming as well.

The Dimetrodon is not dangerous when left alone and can be easily avoided or killed if necessary. However, if one is hit during a frenzied battle with other animals in the swamp, the player could potentially rile them up, causing unnecessary damage and possibly loss of life. Keep an eye out for their sails, as they often lay below the surface with just their sails sticking out.

One of the larger dangers when fighting the creature, oddly enough, is the creatures' surroundings. The swamp is filled with hostile animals and riling up a Dimetrodon can take the focus of a player away from other animals like the Kaprosuchus, which can end the battle quickly with unprepared explorers.

One thing to keep in mind is that, while most water is shallow where Dimetrodon can be found, the creatures are surprisingly more dangerous during a confrontation underwater. Without SCUBA Flippers to boost the player's swim speed, a Dimetrodon finds it much easier to close the distance and pursue, whereas it would be easily left in the dust on dry land. They also lack an Oxygen stat, meaning they can stay underwater indefinitely, so trying to escape them via the water is ill-advised.

The Dimetrodon's slow speed proves to be its one major weakness, and combined with a wide turn radius makes it almost harmless. Just make sure they do not get the jump on the player, especially in deeper water, or the player could be in for a surprise!