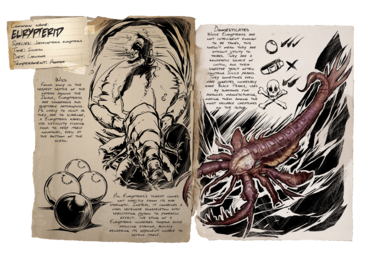 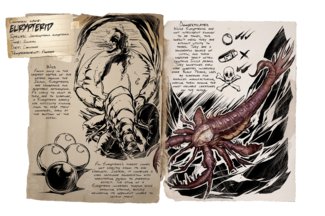 Dossier
These values may differ with what you see in-game or written elsewhere. But that is what the dossier says.
Group
Invertebrates
Species
Jaekelopterus eurypterus
Time Period
Silurian
Diet
Carnivore
Temperament
Aggressive if approached
Release Versions

The Eurypterid (you-rip-teh-rid), sometimes referred to as Sea Scorpion, is one of the creatures in ARK: Survival Evolved.

The Eurypterid moves silently along the floor of the ocean, slowly undulating its body to move through the waterways. Since they spawn in clusters of two to four, there will often be many in a single area, often around coral and seaweed in the depths. When a player approaches the area to hunt for

Silica Pearl clams or for the Eurypterids themselves, the Eurypterids will swim towards the invader and attack. They can envenomate the survivor, knocking them out before dispatching the paralyzed body.

Pulmonoscorpius with adaptations to fit an aquatic lifestyle. The entire animal is armored with a

Chitinous exoskeleton. The body is made up of the front "head", or the prosoma, and the segmented body and tail, or the mesosoma and metasoma respectively which together make up the opisthosoma. Its rearmost 4th pair of legs are flattened into flippers and its tail moves in an up and down motion, being propelled by a tail fluke. The end of the tail bears a scorpion-like venomous stinger. The 3rd pair of legs are long and skinny, followed by the thick, highly segmented 2nd pair of legs. The 1st pair of forelimbs are large and strong, armed with formidable spines which can close as a vice to trap and shred prey. 2 arm-like chelicerae rest at the front of the animal, which manipulate food to the mouth. 2 small, beady compound eyes are also present on the head. Range of coloration is currently unknown.

This section displays the Eurypterid's natural colors and regions. For demonstration, the regions below are colored red over an albino Eurypterid. The colored squares shown underneath each region's description are the colors that the Eurypterid will randomly spawn with to provide an overall range of its natural color scheme. Hover your cursor over a color to display its name and ID. 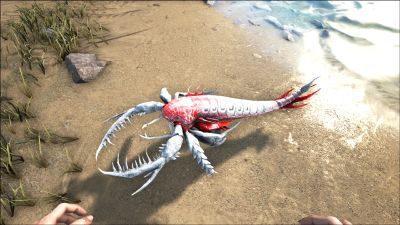 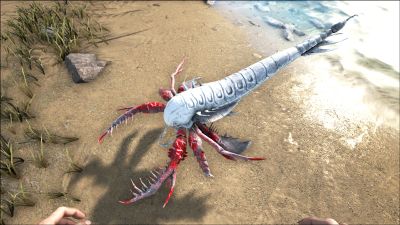 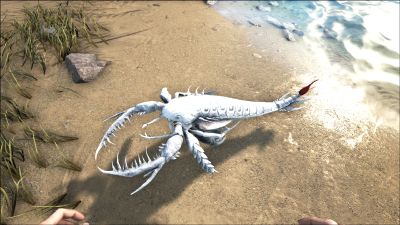 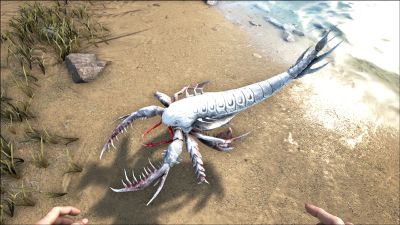 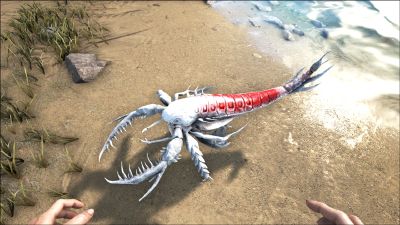 1Percentages are based on the value of the stat the moment the creature was tamed (after taming effectiveness)
2The absolute Base Damage is shown here instead of the percentage.
3Wild creatures do not level up movement speed
4Torpidity increases every level on wild creatures, but can not be increased once they are tamed.
5The Eurypterid is incapable of drowning.

This section describes how to fight against the Eurypterid.

Eurypterids will spawn quite rarely along the ocean floor in small clusters of 2-4. They are rather small, but they can still pack a punch, as their attacks are fairly strong and rapidly raise

The first step is locating a Eurypterid. They remain relatively hidden in the coral and seaweed underwater, so they are quite hard to find. Once found, construct a plan on how to attack without subjecting any players to the deadly poison they employ in their attacks, which can drain stamina and induce high amounts of torpor. Sea mounts can be used to stay safe during killing, but large creatures cause a heavy knockback on the Eurypterids, so the area of effect loses efficiency and damage stops are enforced. The

Ichthyosaurus surprisingly can be used to farm the Eurypterids, because it is immune to Torpor and has no knockback, which effectively increases the damage against the Eurypterids since they will never try to flee and stay in range. Keep in mind that the Eurypterids will still deal normal damage to the Ichthy.

A strategy that's only recommended for players with the

Swim down to the bottom of the ocean where the Eurypterids hide, then once you find some, swim upwards. These creatures can not leave the ocean floor, so you can safely float above them and shoot them down with a crossbow. Once you've killed them, swim down and safely collect their corpses with a

Metal Hatchet. If one desires their rare

Black Pearls, be sure to collect their bodies with a

Employ any weaponry that, in use, will keep a player out of range of the tranquilizing attacks they deal. A

Pike can be used by more alert, daring survivors who have powerful melee damage. Otherwise, mounts and ranged weapons like the

Harpoon Launcher are your best shot.

Eurypterids are small enough to be easily hidden in the ocean's many plants and reefs. Use caution when collecting pearls, as their venom causes extreme amounts of Torpor, while their actual damage is low, they can even render larger creatures unconscious easily. This can turn a simple collection mission on its head quickly.You might also aggro more powerful aquatic dinos such as

Eurypterids float barely above the seafloor, but cannot freely swim in the open water. They also have low

Health, so bringing a large sea mount guarantees their death.

For information pertaining specifically to the real-world Eurypterid, see the relevant Wikipedia article