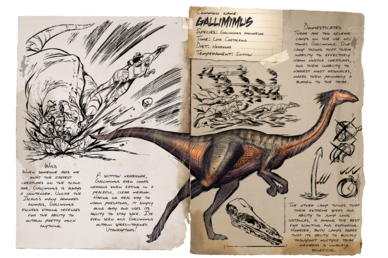 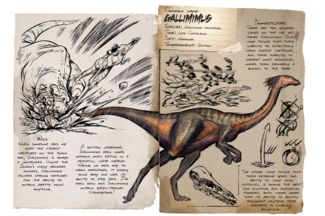 Dossier
These values may differ with what you see in-game or written elsewhere. But that is what the dossier says.
Group
Dinosaurs
Species
Gallimimus evolvelox
Time Period
Late Cretaceous
Diet
Herbivore
Temperament
Skittish
Release Versions

The Gallimimus (gal-uh-MY-mus) is one of the Dinosaurs in ARK: Survival Evolved.

Gallimimus is a very skittish, shy species. Constantly on alert for carnivores, it never walks slowly, preferring to move around at a moderate trotting speed. When injured, it will run extremely fast away from its attacker, but is slowed down in water.

Gallimimus is a large herbivore resembling something akin to a reptilian ostrich. Like an ostrich, it has a long neck and a beak for eating foods like grasses and berries. It has a slim build with a long tail to act as counterbalance when sprinting from predators like Carnotaurus and Raptors.

This section displays the Gallimimus's natural colors and regions. For demonstration, the regions below are colored red over an albino Gallimimus. The colored squares shown underneath each region's description are the colors that the Gallimimus will randomly spawn with to provide an overall range of its natural color scheme. Hover your cursor over a color to display its name and ID. 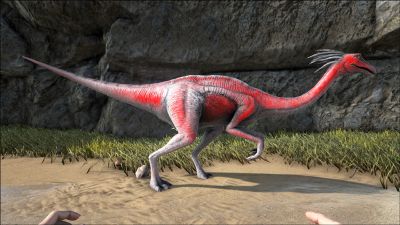 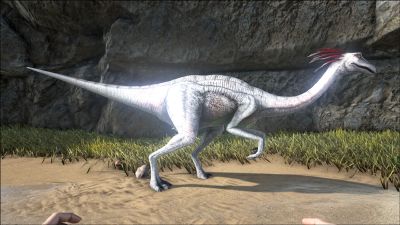 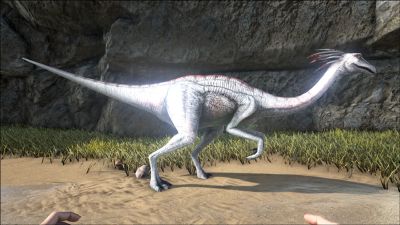 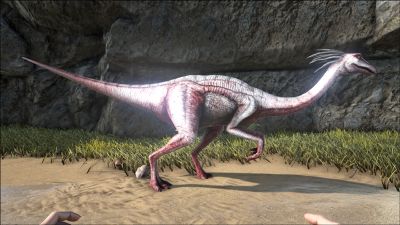 Gallimimus has low health compared to its torpor, a crossbow with tranq arrows can kill them, even if you give 5 seconds between shots.

It is easiest to trap it in a cliff or with bear traps to tame it but caution is advised as it has very low health so a crossbow would probably kill it.

This section describes how to fight against the Gallimimus.

In general, the Gallimimus has a skittish behavior and tends to run away on the first shot. The Gallimimus, due to lacking of health becomes quite annoying to tame. The Gallimimus becomes an efficient Dinosaur after taming due to its high speed.

Aiming for the head will kill the Gallimimus almost always, no matter the level. When hit, it will run off at extreme speed. Try to trap the Gally in rocks or on a cliff if it doesn't go down first time.

Rifle works best but can still kill the dinosaur in one hit.

It's not dangerous but if it doesn't go down on the first shot you're not likely to get another chance.

It has high movement speed but a lack of health, therefore it is easy to take down.

For information pertaining specifically to the real-world Gallimimus, see the relevant Wikipedia article