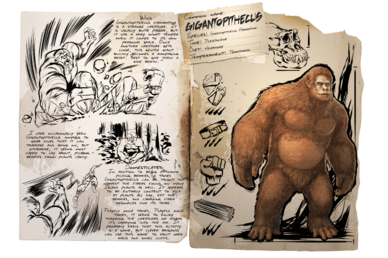 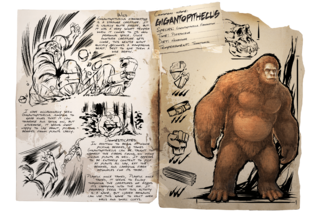 Dossier
These values may differ with what you see in-game or written elsewhere. But that is what the dossier says.
Group
Mammals
Species
Gigantopithecus fibrarator
Time Period
Pleistocene
Diet
Herbivore
Temperament
Territorial
Release Versions

Similar to the Ichthy, Gigantopithecus is tamed by hand-feeding rather than through the use of tranquilizers. To feed one you will need to be level 30, then place an appropriate food in the far-right slot of your hotbar and get close enough to the creature for the button prompt to appear. Gigantopithecus will take one piece of the food from your inventory and will play an eating animation. You must wait for the creature's hunger to go back down before it can be fed again, a process which takes some time, depending on the level and the food (see tables).

When sitting on a Gigantopithecus and pressing the alt-fire button (default: right click), it grab the survivor with the blue crosshair appearing in front of the HUD. It will toss him/her forward upon clicking again. This can be used to get over walls without destroying them. Be careful as this does cause the Gigantopithecus to melee attack directly in front of it, damaging anything or anyone in the established path.

They are an excellent mount for gaining an acrobatic advantage if you know what you're doing.

Ichthyornis will do the same thing as it does for survivors when thrown towards fish.

Ferox when small. Also, when a small Ferox is carried, it will glitch and appear between the two Gigantopithecus' feet.

For information pertaining specifically to the real-world Gigantopithecus, see the relevant Wikipedia article