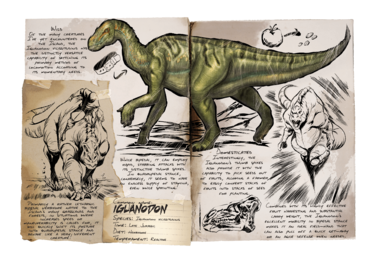 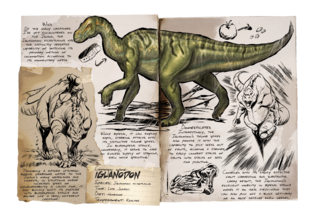 Dossier
These values may differ with what you see in-game or written elsewhere. But that is what the dossier says.
Group
Dinosaurs
Species
Iguanodon vicissitudinis
Time Period
Late Jurassic
Diet
Herbivore
Temperament
Reactive
Release Versions

The Iguanodon (ig-WAN-oh-don[1]) is one of the Creatures in ARK: Survival Evolved.

Iguanodons, like many other herbivores on the ARK, are gentle creatures that will not harm humans or other animals on sight. However once attacked, they will fight back using their thumb spikes in bipedal mode. When sufficiently injured or if their torpor rises high enough, they will turn and flee on all four legs. Like other herbivores, it is a herding animal and will help defend others from attack.

The Iguanodon is a medium herbivorous dinosaur that bears a strong resemblance to the Parasaurolophus but without the distinct head crest. Instead the animal has two spike-like thumbs for prying fruits open to reach at delicious seeds and stabbing would-be predators. They are as capable of walking on all fours as they are on just their hind legs.

This section displays the Iguanodon's natural colors and regions. For demonstration, the regions below are colored red over an albino Iguanodon. The colored squares shown underneath each region's description are the colors that the Iguanodon will randomly spawn with to provide an overall range of its natural color scheme. Hover your cursor over a color to display its name and ID. 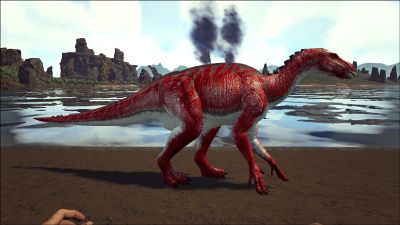 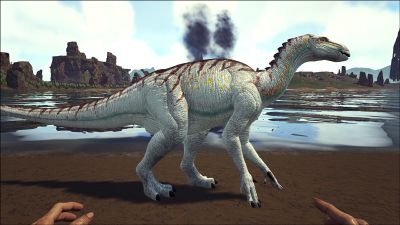 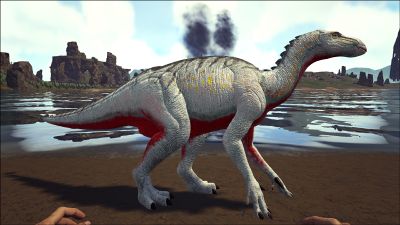 The Iguanodon has a rather fast movement speed for early players and will begin to run when Health is low or Torpor is high, making the Bola a valuable tool when attempting to knock one out.

This section describes how to fight against the Iguanodon.

Despite being an otherwise passive creature, the iguanodon will retaliate against any violence directed toward it. It is surprisingly competent in combat.

Throw a bola at the iguanodon and attack it from behind

A sword will be more than sufficient, due to its rather low Base Health.

Avoid attacking from the front by using bolas or distracting it with a mount due to its decent reach when using melee. Its attacks can easily kill an unprepared survivor.

Susceptible to Bolas and has rather low health pool.

For information pertaining specifically to the real-world Iguanodon, see the relevant Wikipedia article.