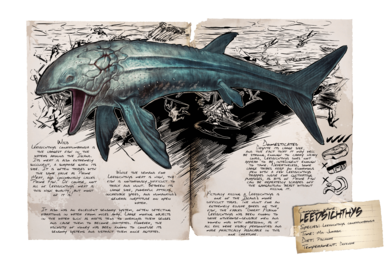 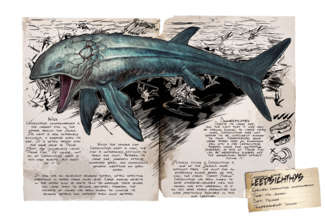 Dossier
These values may differ with what you see in-game or written elsewhere. But that is what the dossier says.
Group
Fish
Species
Leedsichthys conviviumbrosia
Time Period
Mid-Jurassic
Diet
Piscivore
Temperament
Defensive
Release Versions

The Leedsichthys (Leeds-ick-thees) is an aquatic Creature in ARK: Survival Evolved.

The Leedsichthys is passive toward most things with the exception of rafts. They will stop at nothing to take down any raft in open water. Their sheer mass gives them the power to wreak havoc on even the best protected raft. When a raft is encountered the Leedsichthys will charge at full speed smashing the raft to bits by dealing direct damage to the raft itself even when the raft is fully encased in stone or even metal. Boaters beware; the Leedsichthys are everywhere, and aggressively out for your watercraft (but not on mobile).

The Leedsichthys is a spectacular sight for any deep-diving survivor. Nothing less than an enormous fish, the beast's cavernous maw is capable of swallowing humans whole (thankfully, the creature only feeds on minuscule fish and plankton as well as boats apparently). Its head bears light armoring to protect itself from Mosasaurus and a powerful tail, capable of turning rafts into splinters, propels it through the open ocean. The beast is so vast that bits of its flesh can be scraped off its body without seriously injuring it - a tactic that survivors use along with small water predators.

This section displays the Leedsichthys's natural colors and regions. For demonstration, the regions below are colored red over an albino Leedsichthys. The colored squares shown underneath each region's description are the colors that the Leedsichthys will randomly spawn with to provide an overall range of its natural color scheme. Hover your cursor over a color to display its name and ID. 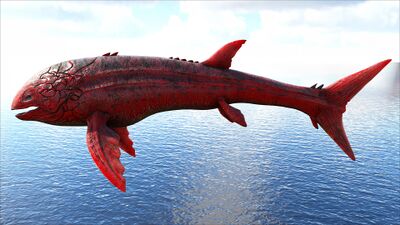 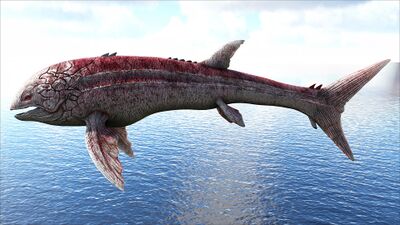 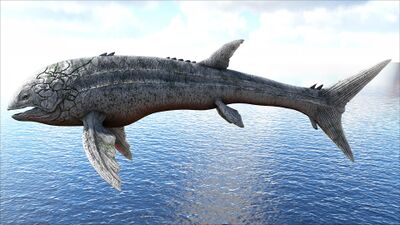 While it cannot be tamed, it can be captured by leading it into a large pen to scrape Fish Meat and not worry about risking the survivor's life collecting in the open sea.

This section describes how to fight against the Leedsichthys.

A normally passive creature to players and other sea creatures that you can harvest Raw Fish Meat and Raw Prime Fish Meat off without damaging it.

Use a high melee damage

Megalodon mount to attack its sides, you can easily out maneuver it and avoid its melee attack and get around the heavily armored front.

Another strategy would be to lure it onto the beach or shallow water, potentially trapping it and leaving it exposed to attack. Though that is a good strategy, try trapping it in areas it can not move much in, making it hard for it to escape.

Melee is not recommended. Crossbow or Harpoon Launcher, ranged weapons that can be fired underwater are preferred. If lured at beach, then any ranged weaponry can be used.

Powerful jaws that have the ability to kill most survivors in one hit. Leedsichthys are very aggressive towards rafts and their occupants, and can destroy even metal ones with a single hit. (Swimmers -mounted or not- are normally not attacked). This is not the case on mobile.

Megalodon are commonly seen surrounding it. They also have an armoured front similar to that of a

Very Slow with a Large turn Radius and no armor on its sides.

Giant Bee Honey off the raft will temporarily calm the Leedsichthys. Its advised to have more than one survivor; one to maneuver the raft while the other toss honey thus increasing the odds of escape.

For information pertaining specifically to the real-world Leedsichthys, see the relevant Wikipedia article.