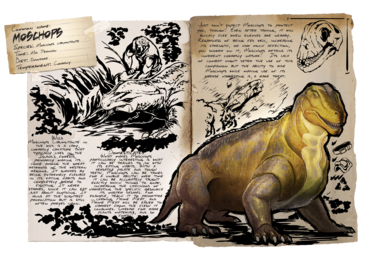 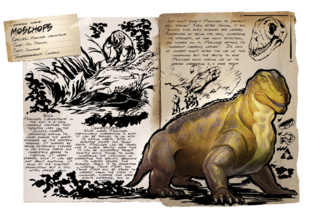 Dossier
These values may differ with what you see in-game or written elsewhere. But that is what the dossier says.
Group
Synapsids
Species
Moschops cibumutante
Time Period
Mid Permian
Diet
Omnivore
Temperament
Cowardly
Release Versions

2 Not rideable on ARK: Mobile.

The Moschops (Moss-Chops) is one of the creatures in ARK: Survival Evolved.

The Moschops is a passive, friendly animal that doesn't take notice of survivors or other creatures, until attacked. When threatened, they will flee. A lone Moschops may flee even if its egg is stolen, although groups may attack instead.

Despite its appearance, the Moschops is not a dinosaur or even a relative, but much more closely related to mammals as it is a Therapsid, or mammal-like ancestor. It has a barrel-shaped body to hold the large gut necessary for its varied diet with sprawled-out forelimbs and a short tail. Perched on its body is a short, thick neck with a broad head.

This section displays the Moschops's natural colors and regions. For demonstration, the regions below are colored red over an albino Moschops. The colored squares shown underneath each region's description are the colors that the Moschops will randomly spawn with to provide an overall range of its natural color scheme. Hover your cursor over a color to display its name and ID. 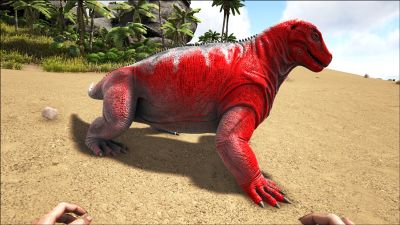 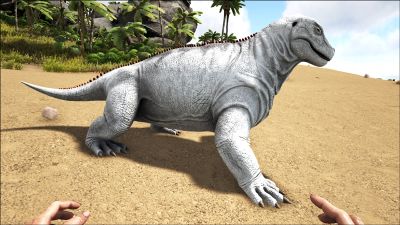 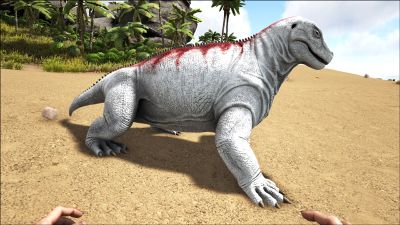 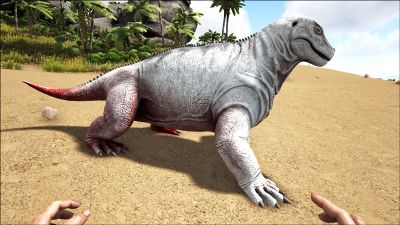 Moschops
The stat-calculator does not work in the mobile-view, see here for alternatives: Apps Note that after the creature is tamed it gets bonuses on some stats depending on the taming effectiveness. This makes it hard to retrieve the levels on a tamed creature, so this tool is only for wild ones, but gives a first impression, how well the stats are distributed.

When passive taming a Moschops, it will randomly cycle through one of the following foods it wants to eat. Feed it exactly what it asks for.

Build a pen with 4 fence foundations and 4 fences.

Use a Kaprosuchus to place it inside, quickly dismount and close the pen. [Note, however, that on Official PvE Servers this does not work.]

You can safely passive tame it now without having to worry about letting it walk away.

Remember to stock up on all the resources it eats before attempting to tame one, as it will cycle through food it wants. Because many of these resources can spoil, it is advised to take a dino along to store them until needed.

There is no KO strategy. Since it is a passive tame, you should not knock it out, if you do its hunger will decrease rapidly making any future passive taming attempts useless.

This section describes how to fight against the Moschops.

The Moschops will flee when attacked. It is a myth that stealing their eggs will provoke them. They will simply run away. They will attack ONLY if you take too long killing them.

Attacking from afar with ranged weapons or driving them into a corner where they can easily be finished off. Because of their low HP, you can also throw bola at Moschops and hit it with a Spear or Pike a few times. You can also use a small herd of domesticated Dilophosaurus, since they can use their slowing ability to attack.

Ranged weapons or powerful mounts that can kill the Moschops in one swipe are recommended, as Moschops are fast runners but you can still easily outrun them when sprinting. Alternatively you could use a fast mount to hound them or shoot from, such as a Raptor or a Parasaur.

The Moschops itself poses little threat. But the biggest danger of Moschops is chasing them and encountering more aggressive animals. Beware as when cornered they might occasionally attack you, usually taking players off guard with their huge damage for a "passive" creature.

Moschops' reluctance to fight is its biggest weakness and it often falls prey to large and fast carnivores.

Moschops will gather wood, thatch, berries automatically while on wander or if set to do nothing while a tree is very close to it.

The Moschops is the most useful resource creature you can ever have on Ark. It can collect lots of resources, more than most creatures despite being an omnivore. It can gather thatch efficently and some decent woods and can harvest corpse as well, meaning it can be a great hunting creature without waiting to tame a raptor. About meat, Moschops has an effect of chance to gathering prime meat from smaller creatures like Ichthyornis, making it useful as an early refrigerator if you want to quickly tame an unconscious carnivore like Raptors before it spoils. Also, it can gather decent amounts of fiber and berries as well, as well as rare resources such as rare mushrooms from the trees of the swamp. Because of this, Moschops is a very good choice to tame especially for beginners, since they can be ridden right after you tame them, no saddle required. Moschops is also a perfect choice if you felt yourself poor because you have less resources, especially you don't have to wait to tame another creature for resources like Triceratops or anything else. You can use this method right after you spawn in on Ark.

For information pertaining specifically to the real-world Moschops, see the relevant Wikipedia article.