This article is about Onyc, not to be confused with 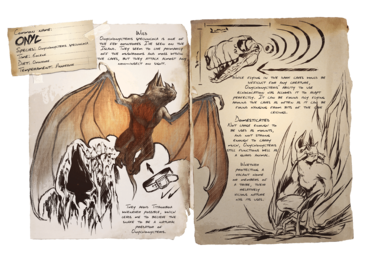 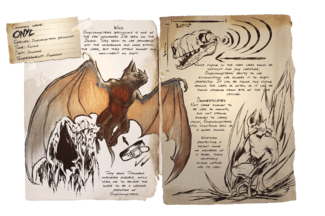 Dossier
These values may differ with what you see in-game or written elsewhere. But that is what the dossier says.
Group
Mammals
Species
Onychonycteris specuncola
Time Period
Eocene
Diet
Omnivore
Temperament
Aggressive
Release Versions

The Onychonycteris (OH-nick-oh-NICK-teh-riss), also known as the Bat or Onyc, is a species of Mammal in ARK: Survival Evolved.

Bats usually fly around in caves and become aggressive when players get too close. Their pathing is currently very poor, but be careful around corners - they may attack you from the side! Due to their protocooperation with the insects inhabiting caves they can turn aggressive towards players even if they have attacked a nearby Araneomorphus or Pulmonoscorpius. When close they will slowly fly to you to attack, when hit they will fly faster and will be harder to hit. Their bite has a 10% chance of inflicting Mega Rabies.

Bats, unlike birds, keep themselves aloft by use of long fingers which are connected with a wing membrane. Bats are good and enduring flyers, but they cannot move around in any other way. Unable to sit, bats must cling to a cave niche and remain hanging upside down to relax or to sleep. Bats are lightweight, with short and mostly brown to gray fur. They have arrowheadlike incisors, which help to part small prey animals.

This section displays the Onyc's natural colors and regions. For demonstration, the regions below are colored red over an albino Onyc. The colored squares shown underneath each region's description are the colors that the Onyc will randomly spawn with to provide an overall range of its natural color scheme. Hover your cursor over a color to display its name and ID. 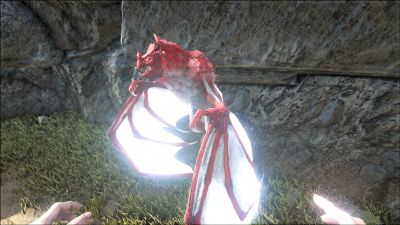 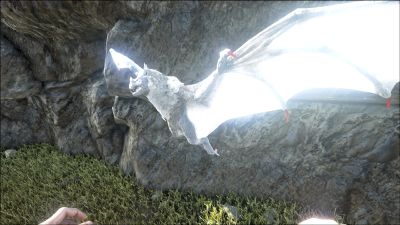 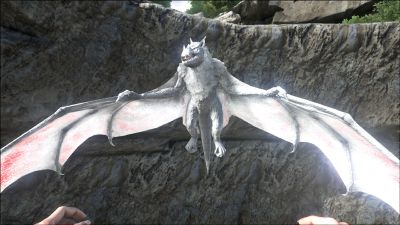 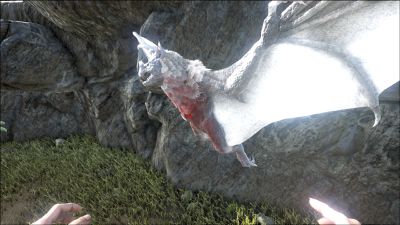 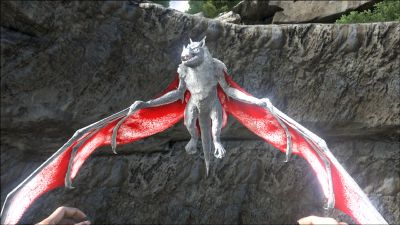 The Onyc is tamed non-violently, rather than through the use of tranquilizers, and requires a player level of 65 to feed. Since it is a naturally aggressive creature, you must first apply

Bug Repellant to yourself in order to keep it from attacking you on sight. The Bat will not be tameable if it is trying to attack another creature or is feeding on a corpse, so you must remove any such distractions from the area, or lure the Bat to a more secluded area.
Once you have the repellent applied and distractions dealt with, place the food you wish to feed it in the right-most slot of your hotbar. Then, carefully approach the Bat until the button prompt to feed it appears - it will eat the piece of food you give it and a taming bar will appear. You must then wait until it becomes hungry enough to be fed again, and repeat the process.
If you accidentally get too close and touch the Bat, it will become aggressive and attack, despite the repellant. In order to continue taming it, you must get far enough away for it to lose interest in you. A Ghillie Suit can be used as a substitute for repellant, but you will need to be prone to get close enough to tame it, leaving you vulnerable to attacks.

This section describes how to fight against the Onyc.

Onyc's appear in caves in huge numbers and can shred even flak armor with ease. Wearing hide armor is quite recommended so you can repair your armor on the fly while still providing protection.

In the close-quarters of the cave you will likely only get 1-2 shots off before the Onyc is on top of you so you will rely heavily on melee to kill them. Concentrate fire with allies and evade melee as much as possible. It should be noted that their damage rapidly compounds massive armor damage and the faster you can kill them the better.

Close-range weapons are necessary. A shotgun is expensive but guarantees victory against all but the largest swarms. A pike can prove capable of piercing many Onycs at once, and a shotgun will obliterate them once they are close.

If you are caught by large numbers of bats without armor they will make short work of you. They also synergize extraordinarily well with other cave creatures that specialize in locking you down with tranquilizing venom and web attacks. Becoming immobilized by other creatures in the cave will render you susceptible to the Onyc's armor-rending attacks. Keep your armor repaired, and bring materials to repair it on-site if possible (remember you can skin Onycs, Sarcos, and Titanoboas for necessary hide but typically cannot gather fiber where bats are found).

Mega Rabies on hit. This makes getting hit much more dangerous to unprepared survivors. Consider bringing Lesser Antidote when exploring areas that Onyc are in.

Don't be afraid to retreat and hit-and-run large clumps to death as the Onyc is surprisingly bad at chasing. Bringing mounts is extremely effective as even a lowly Dimorphodon can prove a necessary distraction to deal lethal damage or, in numbers, fight the bats easily on their own.

For information pertaining specifically to the real-world Onyc, see the relevant Wikipedia article.