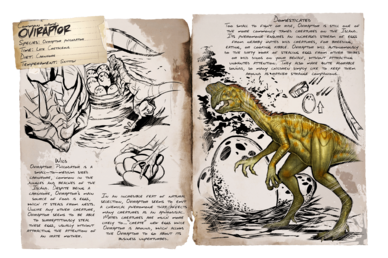 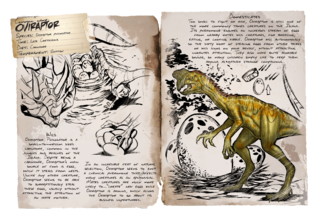 Dossier
These values may differ with what you see in-game or written elsewhere. But that is what the dossier says.
Group
Dinosaurs
Species
Oviraptor philodator
Time Period
Late Cretaceous
Diet
Carnivore
Temperament
Skittish
Release Versions

This article is about Oviraptor, not to be confused with

The Oviraptor (o-vih-RAP-tor) is a Dinosaur in ARK: Survival Evolved.

Very common throughout the island, Oviraptor spends its days prancing around gleefully. Similarly to the Mesopithecus, the creature flees at a rather quick pace if one gets too close or if attacked.

The Oviraptor is a small theropod that can often be spotted by survivors wandering across the island in search of its favorite food, eggs. It sports a crest on its head, presumably to attract mates, and a beak meant for cracking eggshells open to reach the nutritious contents within.

This section displays the Oviraptor's natural colors and regions. For demonstration, the regions below are colored red over an albino Oviraptor. The colored squares shown underneath each region's description are the colors that the Oviraptor will randomly spawn with to provide an overall range of its natural color scheme. Hover your cursor over a color to display its name and ID.

The Oviraptor, once tamed, eats meat and will also eat the occasional dodo egg provided in a feeding trough.

Similarly to the Titanoboa, the Oviraptor is tamed by feeding it eggs. However, you can tame it with both standard and fertilized eggs. Once tamed, it will eat raw meat like any other carnivore.

Heavier eggs are preferred for taming.

Oviraptors are small, quick, and fragile. Their small size and high speed make them difficult to hit once attacked, so try to get it into a corner before you start firing on it. At lower levels, a

Wooden Club may be preferable, and a

Bow could potentially kill one in a single shot.

The best way to tame one is to

Bola it first, then either tranq or slingshot it down.

Alternatively, it can be picked up by an

Pteranodon and moved somewhere safe or shot at by another player.

Pulmonoscorpius will be able to trap the Oviraptor by standing above it allowing you to easily knock it out.

If you have a tamed

Lasso, you can use the Lasso to hold the Oviraptor captive and allow another player to knock it out.

This section describes how to fight against the Oviraptor.

The Oviraptor is easily killed by both ranged and melee attacks, the only problem being its speed and timidness. It will run at the first sign of contact and is very fast, so cornering the animal or using a bola to immobilize it is mandatory.

Being a very fast and very small target, the best way to tame an Oviraptor is to use a

Bola to trap it before it flees. If you have a flying mount, it is a good idea to construct a fenced in-area, then pick up the oviraptor and drop it inside for a safe, secure tame. Even a

Pteranodon can pick up an Oviraptor with ease.

Use a bola to keep it in place, then use torpor-applying tools to knock it out. Beware of its health while you do this, as it may die in the process.

The Oviraptor is not hostile or dangerous at all, but make sure not to run into more dangerous dinos while attempting to tame an Oviraptor.

Anything that can slow or prevent its movement. 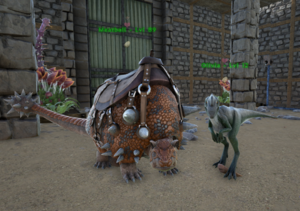 An egg icon will appear over tamed dinos, indicating that the Oviraptor is decreasing the time between unfertilised eggs.

Once tamed, setting the Oviraptor on wander will increase the production speed of unfertilized eggs in nearby tamed creatures, indicated by an egg icon above all affected animals. This effect will also increase the feces laying rate on all dinos nearby (including mammals).

Dinos are also more likely to lay eggs while mate-boosted.

Encumbering the oviraptor while it is wandering will still generate this effect, and is useful for effectively locking the oviraptor in place to prevent it from wandering out of the pen. Simply move it in to position, fill its inventory with heavy materials and then set it to wander.

The Oviraptor can also be used to steal eggs from wild or enemy creatures. Whistling 'attack my target' on an egg will cause the Oviraptor to pick it up and bring it back to you. Remember to be wary of the egg's weight and the fact that using this action may cause the egg's parents to become aggressive.

The Oviraptor will not collect tamed dino eggs, just increase the speed that they are produced. Remember to check every few hours for newly produced eggs, which can be made into valuable kibble for taming.

Final note: Oviraptors do not react to Wyvern eggs, they will not steal them. Oviraptors can and will interact with Wyvern eggs of their own accord, but seem not to when ordered via "attack my target". Simply carry the Oviraptor to a previously scouted nest with a desired egg, having it set to "Follow" with the nearest follow settings can aid in positioning. This has the added benefit of avoiding angering every Wyvern in a large radius when you then take the egg from the Oviraptor thus leaving the player only susceptible to regular agro circumstances which is both easier to avoid and escape. *TAKE THE EGG FROM THE OVIRAPTOR AFTER IT STEALS THE EGG*. Carrying the Oviraptor away with the egg in its hands has been reported to both erase the egg and permanently break the Oviraptor's ability to grab eggs.* Tested working as of 306.89 on official servers.

For information pertaining specifically to the real-world Oviraptor, see the relevant Wikipedia article