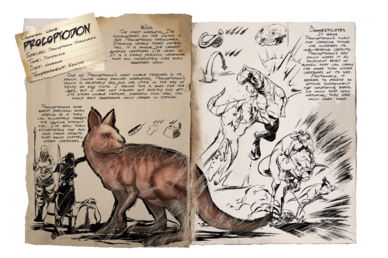 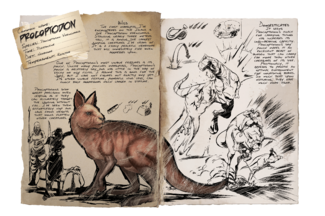 Dossier
These values may differ with what you see in-game or written elsewhere. But that is what the dossier says.
Group
Mammals
Species
Procoptodon vivencurrus
Time Period
Pleistocene
Diet
Herbivore
Temperament
Reactive
Release Versions

The Procoptodon is one of the Creatures in ARK: Survival Evolved.

The Procoptodon is similar to the Parasaur in behavior, and can be seen peacefully roaming around. Contrary to the Parasaur, wild Procoptodon will attack you if their level is higher than your own. The main attack Procoptodon execute is a powerful kick, that can send you and your dino soaring in the other direction.

Procoptodon are fairly rare on the island, and the areas that they inhabit are sometimes too full to hold them. To fix this, slaughter everything you can to try and get one to spawn. Be sure you know where they spawn (see spawn map above.) They enjoy congregating around the bottom of mountains, as they will eventually hop down if they spawn at the top. You can also find them on the flat zones around swamps. They also occasionally spawn on the north-east border of the island, towards the beaches.

It is important to note that unlike other herbivores, Procoptodon will not consume Crops. Both adults and maturing animals will starve if left without berries.

A giant relative of modern kangaroos, Procoptodon is not a common herbivore when compared to the herds of Parasaurolophus and Phiomia that wander about the ARK. It could easily be mistaken for a normal kangaroo as well if it wasn't for the fact that it is bigger than a man. Closer looks show that it also has a much shorter face, reminiscent of a rabbit.

This section displays the Procoptodon's natural colors and regions. For demonstration, the regions below are colored red over an albino Procoptodon. The colored squares shown underneath each region's description are the colors that the Procoptodon will randomly spawn with to provide an overall range of its natural color scheme. Hover your cursor over a color to display its name and ID. 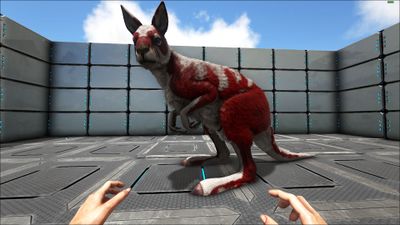 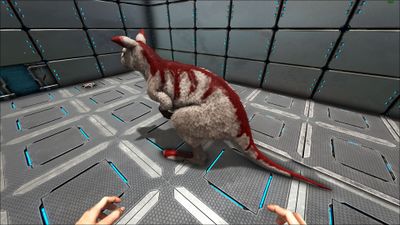 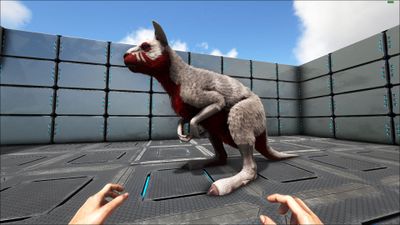 Procoptodons can no longer be picked up by Quetzals, so make sure you have a good source of stamina and speed to catch up with the Procoptodon as it flees. Immobilizing with a chain bola (Not normal Bola) can also work.

Plant Species X Seeds. Once tamed, it can also be fed with

A Rare Mushroom is equal to 75 food points and a Plant Species X Seed is equal to 50. It eats every 100 points of hunger.

This section describes how to fight against the Procoptodon.

While not the strongest, the Procoptodon can cause significant damage if it chooses to attack. However, they typically run away at high speeds rather than stand and fight. Make sure you can keep a fast pace if you hope to kill/tame one! Since the TLC update its dropkick ability makes it a lot more versatile in combat as it does not do lots of damage but has a large knock back making it hard to be hit. Partner this with the new huge jump and significantly reduced fall damage to get out of most tussles.

Large Bear trap, having someone carry you on a chase flyer, or just running it down on foot are the easiest. It can also be lured into a pen by making it agro with Rare Flowers.

If you would like to tame them you should tranq them. Any method works.

The Procoptodon would rather run than fight. Chasing one on foot can result in straying too far into dangerous territory.

Better at collecting berries than one would think. Use the kick attack and gather a ton of them and escape from predators quickly with one good jump! 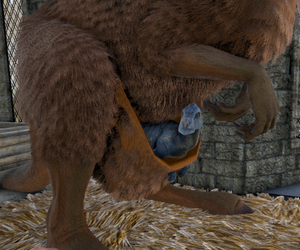 The Procoptodon is capable of carrying the following baby or small creatures. They can be pouched using the radial menu or the 3rd action key (default C,

). This is not available in mobile version yet.

Once the baby hits a certain percentage of growth, it will automatically eject itself from the Procoptodon's pouch, and can not be placed back in. [Editor's note; more research should be done, particularly on what percentage a dino will reach before it is ejected, and whether it varies between different species.]

The following creatures can be carried within a pouch;

Baby dinos sometimes disappear from the pouch without a trace - there is a chance you can find them in the center of the map (at 50-50)! To avoid this, you can simply remove the baby from the pouch when you are away doing something else, as this seems to occur mostly when the baby/Procoptodon is out of render range.

Paraceratherium will only stay in pouch until it reaches 1.2% Maturation.

For information pertaining specifically to the real-world Procoptodon, see the relevant Wikipedia article.