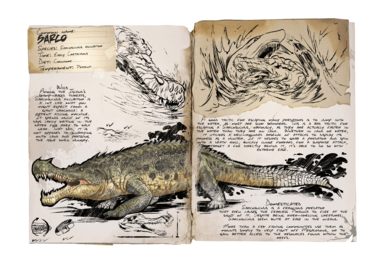 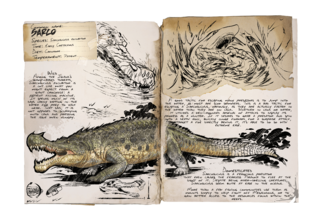 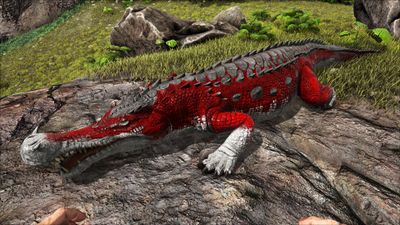 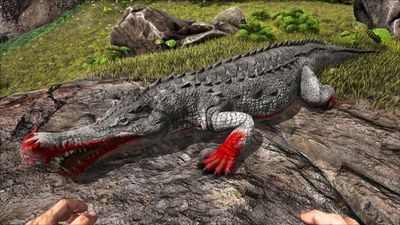 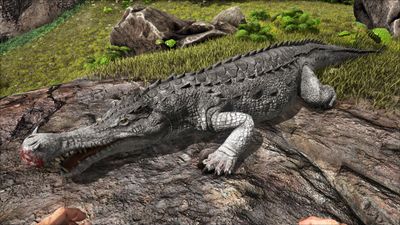 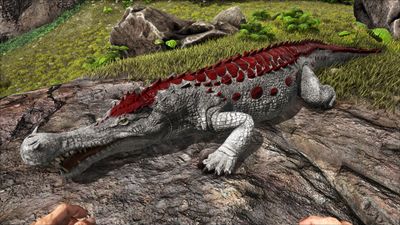 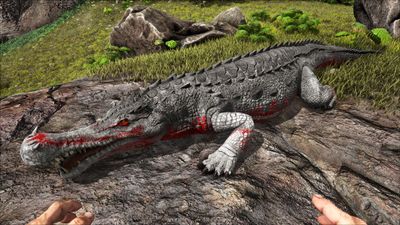 To knock it unconscious, use

Slingshot (Not effective on high level creatures). Ranged attacks are best as they keep you out of it's reach until it falls unconscious.

A good strategy for knocking out a Sarco is to first clear out the area of dangerous creatures, then make sure it is on land (they flee extremely quickly in water), and eventually find a tall rock you can stand on and begin firing darts/arrows from.

If engaged in close combat, try to keep behind it. It will have a hard time turning towards you. If engaged in ranged combat, try and find a ledge to stand to take advantage of its low height. If a ledge cannot be found, shoot at it while backpedaling, allowing enough distance for you to have time to reload without it catching you. If your surroundings are completely clear and you are on land, you can walk towards one of its back legs while hitting it with a melee weapon until it falls unconcious or dies.

Sarcos are agile swimmers and attack faster while in water. Even on land, avoid being grabbed by its jaw as it can perform a crippling death roll.

Travel - The sarco is a fantastic scout thanks to its unmatched maneuverability through land/water and near instant stamina recovery. When swimming, sarcos are very agile and do not require air, making it suitable for long-distance travel.

Piranha flee if they notice a Sarco swimming nearby, allowing the sarco and its rider to roam in hostile waters. On land, it is an amazing climber, as it can go up most hills in the game without problem (Level up in Movement Speed and Stamina).

Amphibious Mount - The Sarco can walk on land and is quite fast while swimming. This is good for land-locked tribes who aren't close to a body of water, but still want to quickly reach the ocean, as the Island's rivers can be used as "highways" with the Sarco.

Diver - The sarco is one of the best divers on the island due to its ability to rapidly surface and dive; unlike its smaller cousin, the

Kaprosuchus. Sarcos also won't surface when dismounted underwater, even when not on follow.

When riding, look out for the creatures of the deep, as the Sarco isn't great for fighting them—but can still easily outrun them. Bring along an opposite gender Sarco along for a mate boost to make it easier to kill

If you are taming something near an underwater cave, you can station your Sarco in the cave aswell. (Level Health, Melee Damage, and Stamina).

Pack Hunter - In large numbers, the sarco can easily overpower most creatures in the deep. its fast speed/attack rate allows a pack to constantly circle and attack foes, thus even the greatest terrors of ark's oceans can be dispatched with ease. If you're used to swarming creatures with dimorphodons, perhaps you may fancy yourself a sarco army for the sea.