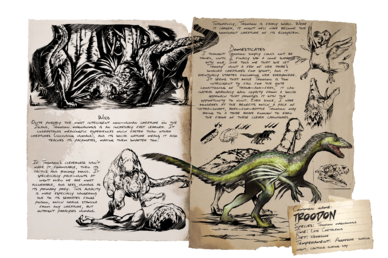 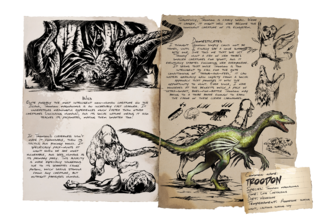 Dossier
These values may differ with what you see in-game or written elsewhere. But that is what the dossier says.
Group
Dinosaurs
Species
Troodon magnanimus
Time Period
Late Cretaceous
Diet
Carnivore
Temperament
Nocturnally Aggressive
Release Versions

The Troodon (TRO-uh-don) is one of the Creatures in ARK: Survival Evolved.

Troodon are aggressive dinosaurs which have very small aggro ranges, almost like that of a Dilophosaur, but when alerted to your presence, all other Troodon in the pack will become aggressive. It is best to avoid these animals when starting out as they can easily outrun a survivor without any points added to speed and their venomous bite will slow you down. At night, their eyes glow and they also have a higher aggro range. A pack of these can take down a Carno pretty easily, so if you are planning on taking one down, take numerous speedy dinos and a ranged weapon.

A smaller relative of the island's Raptors, Troodon is no less dangerous. It has large eyes which glow at night, perfect for spying prey in the dead of night, and serrated teeth made for grievously wounding unlucky victims. Worse still, it is venomous (a trait unseen in their fossil ancestors). Troodon also has a coat of feathers, in contrast to the relative "nakedness" of the island's other small carnivorous dinosaurs.

This section displays the Troodon's natural colors and regions. For demonstration, the regions below are colored red over an albino Troodon. The colored squares shown underneath each region's description are the colors that the Troodon will randomly spawn with to provide an overall range of its natural color scheme. Hover your cursor over a color to display its name and ID. 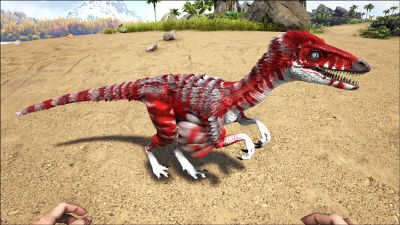 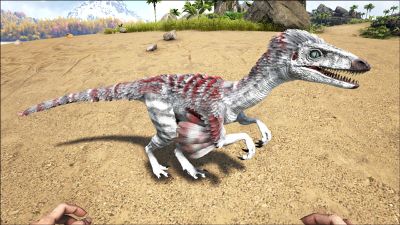 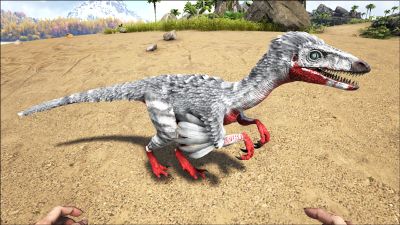 Troodons use a unique flavor of Passive Taming. Instead of putting a Food item in your last Inventory Slot, you have to instead allow the Troodon to kill your tames. Troodons gain Taming Affinity by earning Combat Experience, with the amount required reduced by 40% at night. Taming Affinity will only be credited to a player if the creature killed belonged to you or your tribe. A singular tame is capable of providing experience to multiple Troodons. Tests have shown this is unreliable, but can be reproduced.

This section describes how to fight against the Troodon.

It is not advised to engage in combat with a Troodon in melee range as these cheeky buggers are small, move very fast, and their poisons cause rapid torpor gain that is not lessened by Riot Gear. Fight them mounted, or keep stimberries on your hotbar and constantly eat them while fighting. However the latter is less likely to work against more than one Troodon.

Their venom only drains stamina on other creatures but adds torpidity to survivors, so as listed above it is advisable to fight them on a mount. Any mount will do, since Troodons have low HP, but high stamina is advised. If you must dispatch of a Troodon then do so during the day if you can help it. They can very easily conceal themselves in environments dense with foliage, rocks and trees so be sure to take all pack mates into account before attacking.

To combat a Troodon, use either a tamed & mounted dino or ranged weapons so it can't knock you out. You can also try to throw a bola at it. Then you can just use a range weapon, or a melee weapon with reach to kill it (i.e. Pike). Avoid getting too close.

Troodons are considerably stronger at night. Their aggro range and speed increase by a large amount. A huge danger to early game Survivors. They also gain pack bonus similar to compies, max of +4 only works at night. Packs usually consist of 3-4 individuals.

Long ranged weapons such as the Crossbow can nullify the Troodon's torpor effect if used properly. Troodon are scared of most light sources and will run away from campfires and torches, carry one on you to deter attacks,.

For information pertaining specifically to the real-world Troodon, see the relevant Wikipedia article.