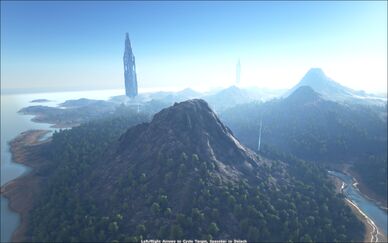 Far's Peak is the mountain at the North-East of The Island.

To the West, a shallow river divorces the mountain's foot from the terrain.

To the mountain's south and east are the East Spawn Zones.

On the Northern as well as the Eastern side, Far's Peak reaches nearly directly to the coast, only being hindered by small jungle.

Before arriving at the bleak and rocky mountain slopes, a survivor has to cross these narrow pieces of jungle forest on each side that separate it from the riverbanks and ocean coastline.

Typically for mountain terrains, iron ores and obsidian spawn on the slopes. Crystals can only be found near the summit.

Trees rarely grow on the harsh and cold slopes. Be prepared to be confronted with extreme cold below 0 °C, so come equipped with a campfire, Fur armor, and/or Fria Curry.

Near the river and coasts, it is common for the player to meet Dilo, Megalodon, Raptors, Carnotaurus, Spinosaurus or T-Rex. However, harmless herbivores such as Carbonemys and Trike spawn there as well.

Upon reaching the slopes, the survivor can see Ankylosaurus, Mammoths and Brontosaurus, all not endangering the player. Only Sabertooth and Argentavis, and rarely Raptors, pose a threat to survivors. Higher up on the mountain, there might be a few Rexes or Carnos, but they are not difficult to avoid. Additionally, the unhindered lines of sight at the top allow for players to react to and hide from hostile creatures long before a threat is upon them.

On rare occasions Giganotosauruses can be found near the summit of the mountain.

Reaching the peak isn't easy. Many slopes can't be climbed due to their steepness. One possible way is to walk up the North-Eastern slope. This journey can be made much easier with a good mount such as a Raptor that can easily climb some of the steeper parts of the mountain that would be impossible to climb on foot. It is even possible to bring mounts with you. But be aware once you reached the top! It may happen that a tamed dino or a player himself falls down, as the rock descends extremely steep on the other sides of the top. Don't ever try to find an alternative way down and always remember your path.

Even being faced with multiple dangers on the way, a trip up to the Far's Peak is always worth its troubles. Not only because of the resources, the view from top of this mountain is outrageous. It is possible to overview the whole island, even to see the far Southern Ocean.