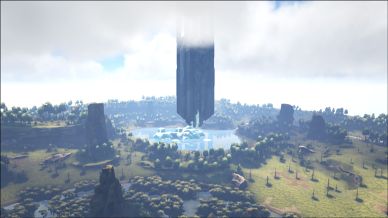 The Snowy Grasslands (unofficial name) are sprawled out around the Green Obelisk and is a difficult area to survive in with its dangerous predators and cold temperatures. In the middle of the grasslands rests a large lake, known as Penguin Pond with an iceberg floating in its center. This iceberg is the primary habitat of the Kairuku in The Center, and thus the only place to reliably obtain Organic Polymer. Also found on the iceberg are several Oil-bearing rocks and Metal nodes. Large amounts of metal can be found along its several cliffs and especially along the Edge of the World.