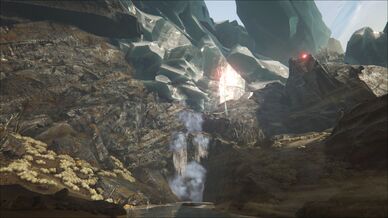 The Frozen Grotto is a region in the Extinction DLC.

Despite the name, the area is not frozen, nor is it a grotto. It is a region of cliffs and pathways in the northern end of the Wasteland where

Corrupted Creatures spawn. The region is bound to the north by a waterfall and the termination of the map. The area is known to have a relatively high spawn ratio of

Tek Rex. As with the other regions outside of the Desert Dome, Snow Dome, Crater Forest and Sanctuary, it is not advised to build bases here due to the meteor showers and

Corrupted Creatures being able to destroy