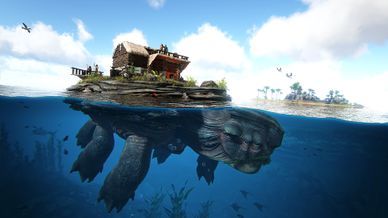 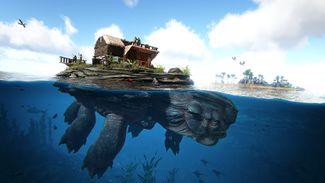 3 Must be in deep water.

The Megachelon is one of the Creature in ARK: Survival Evolved's Expansion Pack Genesis: Part 1.

The Megachelon is a tameable creature with a shell that can be built on, Also growing rare resources on its shell. When submerged, air bubbles will be generated around the shell.

The Megachelon is a giant, six legged turtle that has a human like face, which can be found swimming slowly through the ocean biome of the Genesis simulation

This section displays the Megachelon's natural colors and regions. For demonstration, the regions below are colored red over an albino Megachelon. The colored squares shown underneath each region's description are the colors that the Megachelon will randomly spawn with to provide an overall range of its natural color scheme. Hover your cursor over a color to display its name and ID.

1Percentages are based on the value of the stat the moment the creature was tamed (after taming effectiveness)
2The absolute Base Damage is shown here instead of the percentage.
3Wild creatures do not level up movement speed
4Torpidity increases every level on wild creatures, but can not be increased once they are tamed.
5The Megachelon is incapable of drowning.

This section describes how to fight against the Megachelon.

The Megachelon must be tamed passively with a unique mechanic; locate a

Parakeet Fish School (also called Microbe Swarm when they target you) which can commonly be found in the deeper depths and let it target you. Slowly bring the school to the Megachelon and they should start to follow it, initiating the taming process.

Coelacanth will constantly spawn and attack the Parakeet Fish School and eventually kill it; you may need someone else actively killing these that spawn or acquiring more Parakeet Fish Schools to continue the taming. In general, taming a Megachelon is at least a 2-person job in most circumstances though higher taming rates on a server can make it doable with just one.

The Megachelon is tamed for its utility purposes. First and foremost, it can support a base on its back to ferry survivors safely and provide them with constant oxygen while they are around it. The Megachelon itself can shoot a stream of bubbles that captures creatures and survivors in a bubble and make them float upwards to the surface; this is useful if Megalodons or other hostiles are in your way and you want them to be moved. While the Megachelon doesn't appear to have any special reductions on weight for resources, its high weight capacity allows it to ferry materials with ease. While it has a very powerful bite, the Megachelon is very slow and has a wide turning radius which makes it a poor battle creature against anything partially mobile. It's advised to have some guardian creatures to fend off the dangers of the ocean though a high-level Megachelon can take a lot of punishment.

Mobile Base: The Megachelon offers the ability to create a base on its back in addition to

Oxygen vents allowing you to breathe underwater. Along with also being able to clamber onto land, these combined attributes make the Megachelon an amazing and versatile base.

Tank: The Megachelon has an extremely large

Health pool and resistance to projectiles on its shell, allowing it to tank bullets from

Turrets if positioned properly against them. Structures can also be built on the back of the Megachelon to protect the rider, so turrets aimed against players can be made ineffective in that purpose.