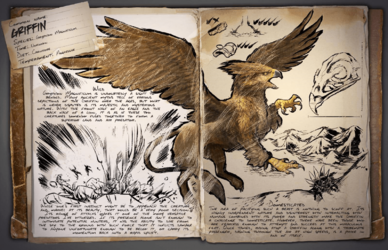 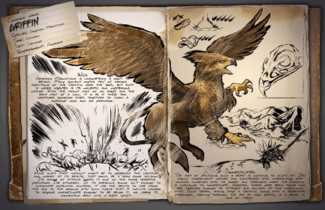 Aggressive and easily distracted so bringing multiple flyers would make obtaining one difficult.

It is a hybrid with a lion's body, tail and two hind legs, and with the wings, head, and talons on the two front legs of an Eagle. They are predominantly various shades of brown, but can sometimes be found red out in the wild. The face and belly can also be white.

This section displays the Griffin's natural colors and regions. For demonstration, the regions below are colored red over an albino Griffin. The colored squares shown underneath each region's description are the colors that the Griffin will randomly spawn with to provide an overall range of its natural color scheme. Hover your cursor over a color to display its name and ID.

This section describes how to fight against a wild Griffin.

Griffins are often seen alone or in a pair, most commonly among trees or at the top of cliffs. They have a rather wide aggro radius, and will chase a survivor for long distances before disengaging. Special care should be taken to be aware of your surroundings, as even the small amount of knock back dealt by their attacks might push a survivor to a death at the base of a ravine.

The Griffin is a surprisingly resilient opponent, and does not appear to take the bonus damage from ranged weapons that other flying creatures do. Fortunately, their attacks also appear to be somewhat weak in comparison to other flying creatures of the same level, and easily avoided owing to their large turning radius. Griffins might occasionally attack a survivor from the ground. They seem to be easily distracted, and are prone to switching targets.

Ranged weapons and pikes seem to be particularly effective, owing to their propensity to circle the player at short range. Be mindful of other hostiles in the area, as the areas they spawn are home to many Carnos and Terror Birds. Mounts with a wide area of effect attack and decent damage such as the Rex will make short work of these creatures.

This creature does decent damage (a wild level 150 deals around 120) and will kill you if not careful.

Its turning radius is atrocious, so one can stand and it'll simply fly around you.

Though difficult to tame, it may be worth attempting to tame a Griffin as high a level as possible since they are not breedable and you therefore cannot breed for better stat mutations. Knock the Griffin out, make sure to make a pen that it cannot get out of, as its torpor raises closer to max it'll fly away and it'll be impossible to knock it out. They don't take up a lot of narcotics. When caught in a pen the Griffin can enter a "panic state" behavior, camera shake will be massive, can be turned off in options.

Grab one Pteranodon, at least 5 stone dinosaur gateways, and 2 gates. Set them down in a row leaving a space to walk out and put a gate on each end, keep one end closed, then you aggro the griffin and bring it back to the trap. When you are near speed up and get off the pteranodon. Aggro the griffin on foot leading it into the pen and walk out of the side, then go around and close the open door. It is now trapped. The griffin can now be tranquilized at leisure and will be protected from other wild dinosaurs, although beware of attacks through the walls.

Another way to tame a griffin is to make a small pen made out of stone, grab a Pteranodon with high stamina and a tamed dodo. Griffins like to aggro on anything that isn't you, so with a pteranodon holding a dodo you can lure it in a pen.

A simple, early game method for taming a griffin is use its huge turning circle against it and let it fly around you while hitting it with tranq darts. It does have a relatively high base torpor, so make sure you bring plenty of tranq arrows. You may need to do some circle strafing to keep out of its way, but it is possible to do it without being hit a single time. Eventually it will flee once its torpor is high enough - chase it down with a fast mount (Such as a Sabertooth) and get the last few tranq darts in while it flies away, being careful not to aggro anything in the process.

Keep in mind its torpor drains extremely quickly, while its food drains relatively slowly, so prepare plenty of narcotics beforehand.

Carrier
The Griffin is a fast flyer, and a rider who has it tamed can pick up players and small-class dinosaurs.

Combatant
The Griffin is a land and air predator. It has a dive bomb attack that thrusts you towards the ground for quite a bit of damage. You can pound the ground for three times your base damage, or dive and pull horizontal and attack with your base attack for ten to fifteen times more damage than your landing attack.

Keep in mind, a player who is holding an item CANNOT dive attack with a Griffin. So make sure your hands are empty!

Aerial Firing Platform
The Griffin can carry two riders, both of which can use their weapons whilst flying. This combined with its ability to strafe sideways makes it useful in chasing down wild creatures for taming, or as a gunship in PvP. Level up Health and Weight.

Energy Dogfighter
The extreme increase in speed whilst diving allows the Griffin to easily escape aerial engagements by simply going for the deck. Much of this speed is retained when pulling out of the dive into level flight, and the momentum can even be used to regain some lost altitude. Though the Griffin suffers in air-to-air combat due to its poor turn radius in level flight, practicing 'boom and zoom' tactics is a viable alternative. Level up Stamina.

Wyvern Egg Collector
With its high base speed, dual passenger seat and skydive ability, the Griffin makes an ideal egg picker mount.Using a whip makes this very viable.Level up stamina and health.

A Griffin is capable of carrying smaller creatures and Human players.

Currently on official, and most unofficial, PVE servers, wild animals may not be picked up to prevent griefing.

The Griffin is capable of carrying the following creatures:

Though not stated in the above table, the

Ferox in its small form can also be picked by the Griffin.

For information pertaining specifically to the real-world Griffin, see the relevant Wikipedia article.