Halls of the Reaper (Aberration)

From ARK: Survival Evolved Wiki
Jump to: navigation, search
Halls of the Reaper 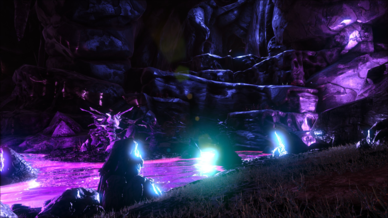 Halls of the reaper is in the south western area of the aberration, The area can be reached through the lost roads on foot but it makes for a dangerous journey. This narrow area is characterized by its higher elevation and flatter ground in contrast to the Halls of the Reaper Queen.

Like all elemental areas. this area is highly radioactive and you must have a hazard suit to survive here. A charge light can also prove itself useful in certain situations. Because using it too much can attract deadly creatures your way.

The Elemental Vault is also found here in the southernmost point of the region, characterized by a medium sized hole in the wall with several red gem clusters nearby.

The area is bordered by the Halls of the Reaper Queen to the north.