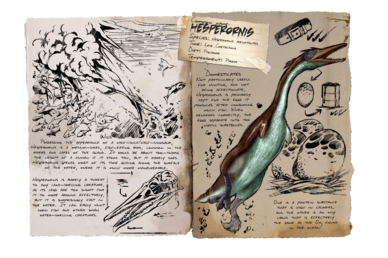 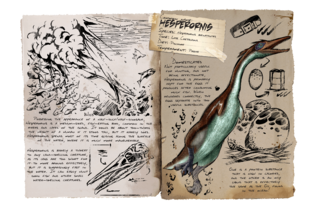 Dossier
These values may differ with what you see in-game or written elsewhere. But that is what the dossier says.
Group
Birds
Species
Hesperornis avenatantes
Time Period
Late Cretaceous
Diet
Piscivore
Temperament
Flippant
Release Versions

The Hesperornis (hess-per-or-niss) or just simply Duck or goose is one of the Creatures in ARK: Survival Evolved.

Hesperornis is quite content to ignore animals and survivor, unless if they get too close for comfort. They will bite any player that touches them before fleeing. They devour fish such as Coelacanths and are in turn hunted by predators and survivors who seek their organic polymer.

The Hesperornis is a strange bird resembling a dinosaur mixed with a loon. Like a loon, it has a long neck, waterproof feathers, and strong webbed feet that propel it through the water at the cost of being rather helpless on dry land. Unlike a loon, it has vestigial wings that prevent it from flying, as well as small needle-like teeth to snatch fish - its favourite meal.

This section displays the Hesperornis's natural colors and regions. For demonstration, the regions below are colored red over an albino Hesperornis. The colored squares shown underneath each region's description are the colors that the Hesperornis will randomly spawn with to provide an overall range of its natural color scheme. Hover your cursor over a color to display its name and ID. 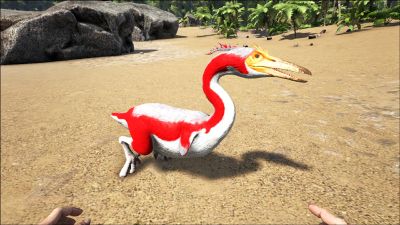 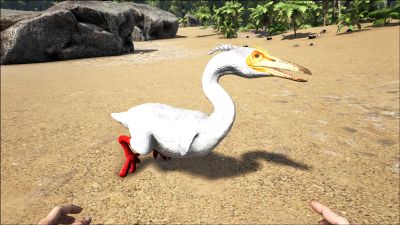 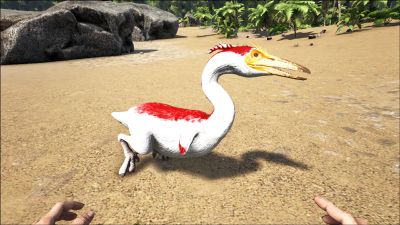 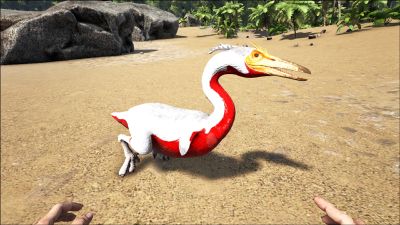 This bird uses an odd version of passive taming. You must kill fish and then bring it to the Hesperornis to tame it. It appears type of fish and, most importantly, size affects how quickly it's tamed. A small fish might give 2-3% taming progress, while a large one can give 9-10% or more. There is a 30-second cooldown between feedings.

A good strategy to use is to put a fish in a foundation with a ramp and three railings, with one open side towards the birds. Then, they'll walk into it without any effort. Another method is to use a

Grappling Hook to drag them to your pen.

Salmon seems to be more effective in taming than Coel. Taming it with fish obtained by an Ichthyornis gives more taming percentage.

The Hesperornis deals barely any damage with its attack, unless in water, so getting it to attack you on land which prevents it from running away is a good idea. Luring it into a pen by walking near and gaining its attention is the best way to prevent you from losing it while finding more fish.

Using an Ichthyornis to kill fish will drastically improve taming effectiveness (roughly 5 to 10 times greater effectiveness per fish) due to the "prime buff" given by fish it kills.

Although the Hesperornis is tamed by the player dragging a dead fish up to the bird. Once it is tamed Hesperornis only eats raw fish meat just like other aquatic carnivores.

Note that this creature was recently released, so official taming data is not yet available.
The information presented here is based on anecdotal evidence and may not be entirely accurate.
For a level-dependent count of time and resources needed, try an external taming calculator, but keep in mind that their numbers are also unofficial.

This section describes how to fight against the Hesperornis.

It is quite easy to kill a Hesperornis due to their low amount of health. It is best to keep it out of the water, as it does more damage while swimming.

The Hesperornis is very slow and poses very little threat, so using a pike should easily do the trick.

Only low-end weapons are needed, such as a spear, bow or pike.

The Hesperornis poses essentially no dangers to even a low-level survivor. Care should be taken while hunting or taming them however, as their preferred hunting areas are rivers, often teeming with other dangerous creatures. Most notably, the piranha, which will occasionally try to grab them from the surface of the water.

They are slow runners, meaning you can easily out run it, or hit it with a weapon and run before you get hit yourself, they also have low health.

Hesperornis Egg when brought out of water after killing and eating 5 fish. This process can be somewhat sped up by killing fish as the player and then commanding Hesperornis to attack fish corpses in the water. Note that there is about 10 seconds delay between Hesperornis reaching the shore and laying an egg. The Golden eggs give a temporary 500% experience boost to smaller creatures such as

Compies or a 10% boost to larger creatures when consumed. They are also an ingredient in Extraordinary Kibble which is the only kibble that's effective at taming

Yutyrannus, Thylacoleo, Megalania, Griffin, and Rock Elemental (Technically, extraordinary kibble can effectively tame any creature that normally has a preferred kibble.) The normal

Polymer: Hunting Hesperornis is a great way to obtain

Wooden Club is the most efficient tool to harvest the polymer.

Fisher: The Hesperornis will insta-kill a small fish (e.g. coelacanth, sabertooth salmon, etc...). This makes it an excellent fisher, which is good because it only eats fish.

For information pertaining specifically to the real-world Hesperornis, see the relevant Wikipedia article.