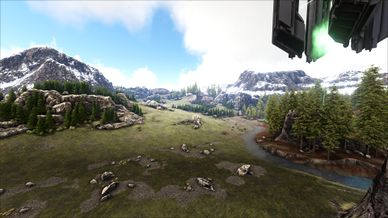 Hidana is a region in Ragnarok.

Hidana is a grassland region located in the western section of Ragnarok. To the east and west, Hidana is flanked by two of the major mountainous areas of the map, while pine forests serve as a border between the grasslands and the lower slopes of the mountains. Northern Hidana (or Upper Hidana) increases in elevation until the cliffs drop away into a great canyon known as the Waterwall of the Ancients, although there are paths leading down into this region.

Central Hidana is marked by groups of trees scattered in clumps across the landscape. Taosst Creek flows from a lake in the north through this area, forming a shallow lake that is a good source of Coelacanths for food. The stream continues out of the southern edge of the lake, bending southwest as it flows through southern Hidana and then curves past the Green Obelisk. The river rocks in the stream can be a good source of metal, as are the metal nodes found throughout the region (especially close to the mountains). Taosst Creek flows south of Hidana and eventually to the sea in the south.

Southern Hidana is a flat plain strewn with boulders suitable for building large bases on even ground. To the south and west, the plateau drops away into a forested section, but paths can lead into these areas to provide access to the forests and ocean to the west.

Hidana is protected on two sides by the mountains Little Snow Top and the Murdersnow area. The Green Obelisk is located in the south area of Hidana, accessible via a short walk through the forest.

Hidana has large open spaces for people who like to build large bases on flat ground, especially in the southwest area. Taosst Creek provides a reliable source of water, fish, and metal from river rocks.

Central Hidana features several large rocky outcrops, which provide elevation above the surrounding plains. Building on these can provide some protection from predators, being high up and out of reach.

It is well-located beside the Green Obelisk, allowing for the easy transfer of tamed animals and items.

Nights in Hidana are quite cold, with an average temperature of around 0 degrees Celcius. This makes high fortitude, warm clothes and/or fire necessary for newcomers to survive until they can build shelter.

The greatest danger in the area is the Rexes that have an uncommon spawn, or if you're very unlucky, the Giganotosaurus which sometimes roams the plains.