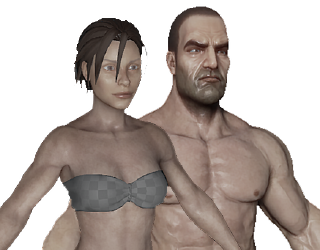 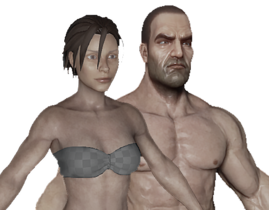 Dossier
These values may differ with what you see in-game or written elsewhere. But that is what the dossier says.
Group
Mammals
Species
Homo sapiens
Time Period
Holocene
Diet
Omnivore
Temperament
Varied
Variants

The Human, also referred to as a Survivor or Player, is the only playable creature in ARK: Survival Evolved. There are two sexes to choose from, as well as numerous options for body types. Every human on the island spawns with a Specimen Implant in its left arm. Humans can reach a maximum level of 105, gain an extra 5 with Chibi-Pets, and ascend to obtain 45 extra levels (15 from Alpha Overseer, Alpha Rockwell and Alpha Corrupted Master Controller each), and up to a grand total of level 155.

After the survivor Helena ascended to Homo Deus with the assistance of Mei Yin, Helena had endlessly tested on a protocol that will keep survivors from being permanently dead, making them able to "respawn" with their memories and experiences intact. The resurrection protocol was perfected to a point where survivors could cheat death enough times so they can bypass the ARK systems. This is needed for survivors to head down to Earth and clear out the Titans from Extinction.

Humans are playable characters and can have wildly varied behaviour. The typical human can be seen scavenging, harvesting, looting or otherwise running amok in any area of the island. Known to tame ferocious beasts to do their bidding, humans can accomplish physical feats and acts of violence far beyond what their meager frames should be capable of. Humans also carry the distinction of being the only creatures on the island capable of crafting and utilising tools (besides the Mantis), and should be regarded as an extreme threat due to this feat- whether it be a simple stone hatchet or an array of autonomous turrets guarding an impenetrable steel fortress, odds have it any human you encounter is a significant and wildly unpredictable threat and should be approached as such.

Humans can have varying appearances and may also wear multiple tiers of clothing and skins, and can have different hair styles. This can be seen by opening the inventory.

This section describes how to fight against Humans. This is only possible on PvP-Servers, as other players cannot be harmed on PvE-Servers.

It is difficult to pinpoint an exact strategy for fighting Humans, because each one has different attack patterns and level of technology. Any given Human encountered may also belong to a Tribe or have nearby tamed creatures, which only adds to the potential danger of attacking them.

It's generally better to try to knock out Humans first instead of going for the kill right away. Chances are good that the enemy player has a higher Health than they do Fortitude, so knocking them out is much faster and gives them far less time to react and retaliate using their own weapons and tamed creatures. Humans can be very easily knocked unconscious by shooting them with Tranquilizer Darts from a Longneck Rifle or Tranquilizer Arrows from a Crossbow. Using fliers such as the Pteranodon or Argentavis, a Human could be lifted up and dropped from high altitudes or dropped into a hostile environment. Though frowned upon, one may lure large predators like Giganotosaurus into a Human tribe's village, or use Swamp Fever infected Dodos as biological weapons. Kaprosuchus allows for quick snatch and grab attacks to get Humans off of their mounts for quick kills.

It's impossible to tell what weaponry an enemy Human might be carrying before they use them on you. However, as a general rule, higher level Humans will most likely have higher level equipment, potentially at better quality if obtained from caves or deep sea crates.

Humans can pose a potentially very large threat, depending on how high of a level they are but even then, some players of low levels can somehow pull off end game tames and steal supplies from high level players and stashes. More experienced players have access to strong weapons, such as Assault Rifles and Rocket Launchers, as well as strong tamed creatures like the Tyrannosaurus, Spino, and Giganotosaurus. They may also belong to a Tribe, and evoking the wrath of an entire team of cooperating Humans can be more trouble than it's worth. Though, this depends on said players temperament and how they choose to approach the situation.

Once knocked out, Humans are helpless to defend themselves, assuming that there aren't any allied tamed creatures or tribe members nearby. It is fairly easy to render a defeated and unconscious Human docile by removing their Weapons and Armor, putting them in Handcuffs, and moving their body into a Cage. Once locked inside, they no longer have any capacity to cause damage. Another weakness is whips, as at close range a whip can disarm any weapon, then allowing the combatant to quickly pick up the weapon. Additionally, while unorthodox, if a player is shot with a Grappling Hook, they can be dragged towards you to force them into melee range. This can be devastatingly effective if you have a powerful melee weapon like a Sword; assuming they don't have a shield, a high quality sword will make short work of even well-armored players.