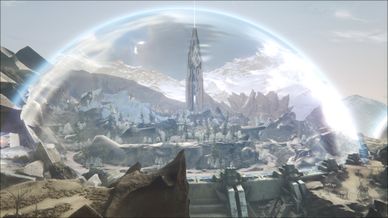 The Snow Dome is a region in the Extinction DLC.

The Snow Dome houses the Blue Obelisk. It is generally inhabited by creatures you would typically expect in a Snow Biome, such as

Mammoths, though it is also inhabited by some creatures such as

Hesperornis. The Snow Dome can be quite dangerous at times, as the constant threat of a

Snow Owl is never far away. The place is also 5°C or 41°F so Hypothermal Protection is Necessary for Survival.

See more details about dealing with

Ice Titan in its respective page.

Ice Titan is bring formed on the arena and begins to attack the moment it is fully materialized.

The following items are needed to open the Ice Titan Portal and summon Ice Titan: