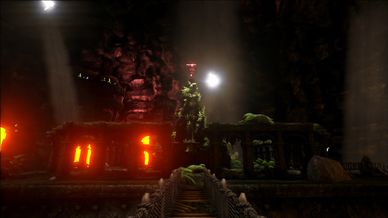 The Jungle Dungeon is a dungeon/cave in the Ruinous Jungle infested with cave dwelling creatures.

Artifact of the Hunter can be found here.

Lava Elemental is the final boss of this dungeon.

There are two entrances:

The entrance to the Lava Elemental Arena is located in this dungeon.

Unique to this cave, are the wrapped bodies of various creatures in spider webs. Most notably, the web filled with cocooned humans. However, a webbed Mammoth, Pteranodon, and 2 Rexes can be found in the first part of the cave.