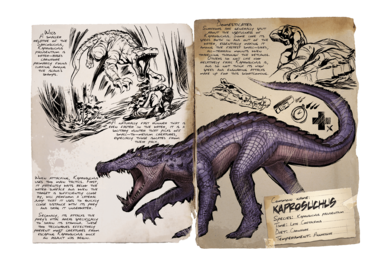 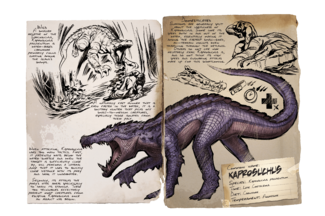 Dossier
These values may differ with what you see in-game or written elsewhere. But that is what the dossier says.
Group
Reptiles
Species
Kaprosuchus paludentium
Time Period
Late Cretaceous
Diet
Carnivore
Temperament
Aggressive
Release Versions

The Kaprosuchus, (Kap-roe-soo-kuss) or simply Kapro or Gator, is one of the creatures in ARK: Survival Evolved.

Like the larger Sarcosuchus, the Kaprosuchus will swim around in the swamp regions (or their spawn locations on the Center or Scorched) attacking different creatures of prey. They are difficult to spot usually due to the density of the trees, especially if mounted, not including Scorched Earth, where they should be easier to spot if you are perched high enough on a rock or ledge, or while mounted on a flier. If the Kaprosuchus is aggroed, it will attempt to lunge at you and, if successful in its attack, will forcibly drag you from your mount and proceed to bite the powerless player in its jaws, until death from either party unless the player uses a whip to release themselves. Its attacks can drain stamina, which will make fighting it difficult when doing it solo, or even in groups of two without strong enough tames.

The Kaprosuchus bears a strong resemblance to its much larger relative, the Sarcosuchus, but still has distinct traits. It has long legs built for sprinting after land-based prey that escape its initial ambush as well as tusk-like fangs, earning it the nickname "Boar-Croc". Its hind legs are slightly longer than its front, giving it a very distinct gait and its head is smaller and more narrow than its crocodilian relative, with a small, more rectangular snout.

This section displays the Kaprosuchus's natural colors and regions. For demonstration, the regions below are colored red over an albino Kaprosuchus. The colored squares shown underneath each region's description are the colors that the Kaprosuchus will randomly spawn with to provide an overall range of its natural color scheme. Hover your cursor over a color to display its name and ID. 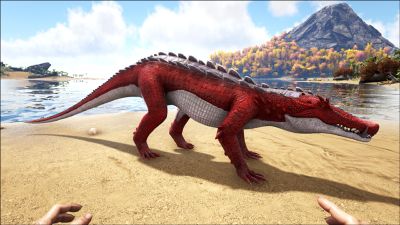 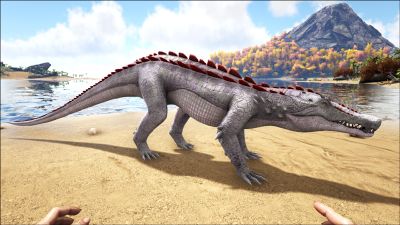 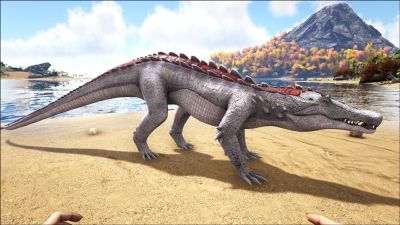 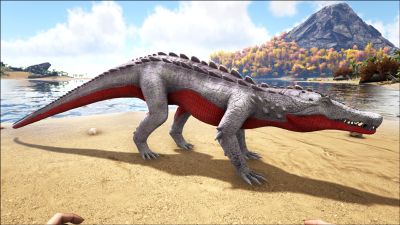 This section describes how to fight against the Kaprosuchus.

Kaprosuchus is an incredibly deadly adversary. To even a player moderately progressed, this assassin of the swamps can prove an extreme threat unless you're prepared, being able to snatch you right off your mount.

Keep an eye open when traveling the swamps for Kaprosuchus, and attempt to avoid them at all costs if you wish to simply avoid conflict. Pounce will be used at mid range. Either intercept the attack, or dodge it. A strong mount, provided you've stayed on your creature, can wipe them out with little effort, due to their low Health stat.

A strong melee weapon, such as a pike or sword, or powerful gun is what you'll need to free yourself once the Kaprosuchus grabs you. A bola can also release you from their jaws.

Shields can block its leap attack and nullify its grab.

The Kaprosuchus' stamina-draining attacks and high power can make its attack fatal. Beware traveling in murky or dark parts of the swamp, or at night, as the cover may allow the Kaprosuchus to sneak close without you noticing and open you up to a surprise pounce. Depending on the size of your mount, it can rip you from your mount causing damage while dragging you away. If your mount runs out of stamina from the initial strike or is unable to free you, you might be as good as dead. One option to free yourself from its grip is to hit it with a bola. Killing it or knocking it out while in its jaws are the only other ways to escape its deadly grasp.

It's not a terribly fast opponent and if it misses a pounce, there's not much it can do other than go into standard melee. Luckily the Kaprosuchus is more of a glass cannon, having around 1,000 health even at higher levels when tamed. It's fairly frail, so several strong attacks and you can easily free yourself. They also have a relatively lower torpor level compared to other animals, so a few tranq arrows can not only allow you to escape it, but leave it unconscious for a tame.

Kaprosuchus is one of the most powerful tames and serves as a decent guardian to yourself and your herd, and having a pack of 2-3 can safeguard you from predators like Utahraptors and Baryonyx. But taming one is incredibly tricky, considering their aggression and their dangerous habitat. Kaprosuchus can easily be ensnared with a bola, so make sure to have a handful prepared. It's recommended to have a small number of tough tamed animals with you, like Carbonemys, in case something goes wrong. But make sure any tames you have are at a distance and within your whistling range. Wait for a Kapro to come close to you and try to draw it in. As it runs toward you, you may have one shot to trap it in your bola. Then quickly run behind it and punch it unconcious, then feed it the meat. The difficulties with these are the likely odds of being attacked by another Kaprosuchus, as they usually travel in packs. They can kill you or your tames could kill them along with the one you are trying to tame. Try to select a location with little walking interference, with plenty of space for your current tames and you to walk around, and while taming your Kaprosuchus be sure to safeguard him/her from predators. If you're alone, a rocky area or cliff will protect you from other threats. If all goes well, no other predators will interfere and your current tames will be silent, then you got yourself a killing machine. Feel free to try this without your tames and with a powerful weapon like the metal pick/hatchet to fend of other predators. Having one or two strong tames like Carbonemys, Iguanodon, or Triceratops would be beneficial to protect you from any other threats, and quickly change their attack settings if they hurt your Kaprosuchus.

With its C or

attack and Right Click or Left Trigger leap, it can pick up small to medium creatures.

A Kaprosuchus can knock you off the following mounts:

For information pertaining specifically to the real-world Kaprosuchus, see the relevant Wikipedia article.