WARNING! After king titan dies and if you go into the light then you lose all your current gear. WARNING! 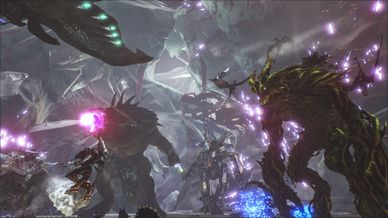 The King Titan Arena is a generated arena within the Forbidden Zone for fighting the final boss of the Expansion Pack: Extinction, the

Upon activation of the Terminal, the

King Titan will slowly materialize in front of the players while

Corrupted Creatures emerge from the corrupted shadows to attack them. A timer will begin counting down from 60 minutes, within which the boss must be defeated. Players must warp out after defeating the boss, since when the timer expires, the King Titan vanishes and the portal that had appeared vanishes as well.

When the King Titan dies, an artifact pod will appear near the corpse, containing a large amount of loot, with at least one being

As with the other three titans of extinction there is a 6 hour timer between summoning another King titan, the timer begins immediately as the king titan dies

The following items are needed to summon the King Titan.